Tales from a hospital bed: Why you shouldn’t go fishing

The Citizen's chief sports writer injured himself during a bit of fun with friends, not realising just how much drama this injury would cause. 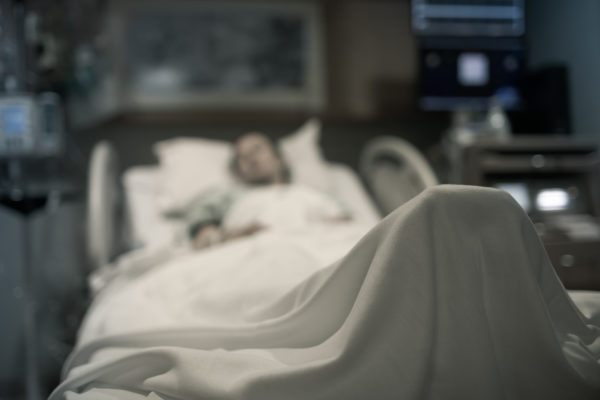 My office and home for the past few days has been my bed in a Johannesburg hospital, after I sliced my big toe on a fishing trip 10 weeks ago and required surgery to reattach it.

This is my story of surviving the surgery, and surviving being stuck in a bed while the world moves on around me.

Last week it looked like I was finally recovering, but my foot was still sensitive when I arrived to cover the national athletics championships in Tshwane.

Feeling empathy for me, a colleague kindly lent me a moon boot so I could drop the crutches and walk around.

That night I was in severe pain and the next day my toe went numb. I was clearly in trouble.

Stuck on assignment and unsure what to do, I performed minor surgery on myself in my hotel room, using a pair of scissors to cut off the dead tissue.

It didn’t work and the following day my toe looked infected, so I sought medical assistance and was informed I had developed gangrene. Lack of blood to the toe.

I was ordered to return to Charlotte Maxeke Johannesburg Academic Hospital for surgery, which I was happy to do as they’ve been very good to me there.

When I arrived at the hospital, however, I discovered the place had burned down.

My friend then took me to Steve Biko Academic Hospital in Tshwane, where I was informed that my toe needed to be amputated.

But they said they had no available beds and sent me home.

Given antibiotics and painkillers, I was told to wait until Charlotte Maxeke hospital reopened this weekend.

This morning, I was told the hospital would be closed for another two weeks.

I contacted the provincial health department. They didn’t respond.

I called the hotline created to deal with Charlotte Maxeke hospital patients. They couldn’t help.

I phoned every public hospital I could think of and was sent from pillar to post.

So now I’m off to casualty at Helen Joseph Hospital, where I hope they will perform surgery before I lose my foot. Or worse, my leg.

I have friends who have offered to help with private medical care, which I will accept as a last resort, but I shouldn’t have to do that.

Our government should be more competent than this.

At least there’s a moral to this story.

The antibiotics I started on Tuesday managed to stop the spread of the infection and the bone that snapped can still be fixed.

The orthopaedic surgeon isn’t sure, but there might be enough tissue left to save my big toe and avoid amputation.

So we go again. Back in theatre tomorrow. More pins, more screws. And this time we hope we get it right.

So I’m lying in my bed and the nurses have told me to keep my phone on me when I’m sleeping.

Personal items vanish in this place, they warn, so I do as I’m told.

Pumped full of drugs that would scare Keith Richards into sobriety, I doze off for a bit.

But something wakes me up.

I roll over and see my roommate, who is suffering from lung cancer, has my phone clutched in his hand. He’s making his way towards the door.

I launch myself from the bed, grabbing the bag attached to my drip and snatching my crutches off the floor.

My heart is beating at a thousand miles a minute as I hit the ground flying.

I’ve been on crutches for three months and I can move on these things.
The race is on.

We turn into the passage, crutches against dodgy lungs, but the cancer is not on his side.

I close in on him fast and he realises he has lost this fight.

He stops and turns around. “I’m sorry!’ he yelps, holding out my phone, which I slip into my pocket.

I take a deep breath before we start hobbling back to the room together.
He stops for a moment, doubled over.

I realise he can’t breathe so I give him one of my crutches.

The next time I wake up we have a quick, tense stare down as I reach for the phone in my pocket.

When I find it I experience a moment of relief and I smile at him. He smiles back.

“We are brothers now,” he tells me.

The moral of this story: Crutches beat cancer in a race.

It’s a lesson my roommate will never forget.

Every time I think they’re going to operate, someone else is rushed in with their life on the line and the rest of us are rightly bumped down the queue.

It’s not easy to stay positive. They managed to stop the spread of infection before I lost all the tissue in my toe, but I have an open compound fracture.

They are pumping me with drugs, so the pain comes and goes, but it’s manageable.

I haven’t bathed for three days because there is one bath and no plugs.

The food is good, but I’m starved most of the day because I’m waiting for surgery. Then they feed me and we start the cycle again.

The nurses here are visibly frustrated and the doctors are so tired I feel more sorry for them than I do for myself.

This place is rarely cleaned because they don’t have enough staff. The paint is peeling off the walls and it’s clear that maintenance is kept to a minimum. They have to wash plastic spoons to feed us.

Most of the resources here are directed towards two things – keeping people alive and funding the theatre for surgery.

The blame here rests squarely on the South African government.

It’s fantastic that we have a public health system, but they need more resources. A lot more.

While politicians fill their pockets, thousands of people lie in facilities like this around the country every day waiting for their turn to be helped.

Some of us live, some of us die. We’re all in pain.

And all we can do is hope. And wait…

I thought I was up and out of here but the doctors have told me to stick around.

Saw my toe today for the first time since yesterday’s operation. It doesn’t look as strong as it feels. It looks completely shattered.

But the doctors insist it is still viable, so I’m back in theatre on Friday and it’s probably not my last visit.

My foot still needs a wire to be inserted and they need to remove a bone. I might also need a skin graft.

“You’re in this for the long haul,” says one of the surgeons.

At first I was put off by this place, which looked dirty and broken.

Everyone here is sick or battered, or both, and sometimes they roll dead people past as they take them to the mortuary.

It can be depressing. When I got here, I was determined to get home.

Now, however, I understand that this is where I am, and as much as I miss my family, I’ve gotta bunker down and be patient.

I have a corner of a room in the orthopaedic ward, and for the foreseeable future this is my home.

As long as they need to operate, I can’t leave. I have to stay on the list for theatre and if I go home I lose my bed.

I feel a bit like the movie character played by Tom Hanks who can’t leave the airport.

But it’s really not that bad. Give it six days and this place grows on you.

I’ve learned to bath from the bowl they place next to my bed when they wake me up at 4am, and I’ve settled into an early routine which ends with supper at 4pm.

I’ll miss some assignments while I’m here, but I can do most of my work from my bed, so that’s a plus.

And I’m still on the emergency list for surgery, which means I have a better chance than most.

And the doctors are incredible. They work through the night and you see them again the next day. They just keep going.

So if they’re willing to put in that much effort to help me, the least I can do is wait.

Every time I see him, he tells me the same story: He was riding his motorbike at 220km/h on the highway when he hit a car.

He tells me how glad he is that he was wearing a full leather suit. He shows me the nasty graze on his thigh, a scar on his forehead and the cuts on his wrists caused by the gloves he was wearing when he slid on the tar.

Donovan has been here for a while and at first I couldn’t understand why. His cuts and grazes are not pretty, but they’ve healed.

I also wondered why he repeated the same thing every time we spoke.

After a few conversations with him and asking a nurse, I figured it out, and his situation broke my heart.

Donovan thinks he’s recovering from the damage to his skin, but that’s not why he’s here.

When he hit the car, his helmet came off and he cracked his head.
He’s here because of the damage to his brain.

He recalls some things that have happened since the accident, but the rest of his life seems to be a blur.

His memory is returning slowly. He knows he has a wife and three children. And now he remembers where they live.

Sometimes he tells me his wife is coming to fetch him and he’s going home soon.

But he’s not going anywhere. Until they can help him, he’s stuck here with his brain on a loop.

Nearly three months into Operation Save My Toe, I was told today that my next op is likely to be postponed.

But talking to Donovan helps me remember that it’s important to live in the now.

And to keep moving forward, all we really need is hope.

While we all hope Wesley will recover soon, we also look forward to hearing more from his hospital tales. Updates will be posted as soon as they arrive.