An irate Zondo said: 'It is not acceptable that Ms Myeni did not comply with summons to be here. There appears to have been no valid reason for her non-appearance.' 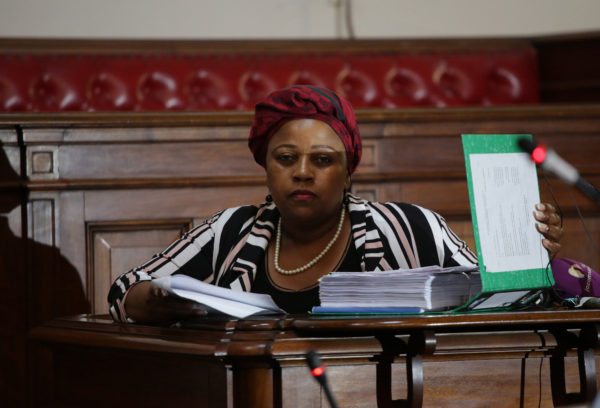 On Tuesday, Deputy Chief Justice Raymond Zondo instructed the secretary of the Commission of Inquiry into State Capture to lay a criminal charge against the former SA Airways board chair for defying a summons to appear.

This followed a morning of drama at the commission. Myeni was scheduled to testify at 10am on Tuesday but only showed up after 4pm, with her lawyer, advocate Nqabayethu Buthelezi, unable to provide a plausible explanation or convince Zondo to postpone the hearing.

Visibly angered by time lost, Zondo ruled: “It is not acceptable that Ms Myeni did not comply with summons to be here. There appears to have been no valid reason for her non-appearance.

“The secretary of the commission must take steps to lay a criminal complaint to the SA Police Service against her for being in breach of the Commissions Act.

“I direct that she should make herself available to give evidence – via Zoom or virtually. She should be available from 2pm.”

Buthelezi maintained Myeni did not receive the communication from the commission because her previous lawyers, Mabuza Attorneys, failed to forward it to her.

Describing her non-appearance as bordering on defiance, Hofmeyer argued: “My submission to you is that Ms Myeni is, indeed, in defiance of a summons and that is a criminal offence. Criminal charges should be laid against Ms Myeni.

“We have not even been furnished with an affidavit from Ms Myeni explaining her position.

“The only explanation we have been given from the bar by my learned friend is that on Friday she asked for summons to be stayed. We were told this morning that Ms Myeni was en route to a family engagement in Port Shepstone.”

Six hours later, Myeni, who testified from KwaZulu-Natal via a video link, asked to address the commission in isiZulu for her neighbours, members of her church and associates to hear “my side of the story”.

Speaking in isiZulu, Myeni told Zondo: “I am a respectable community leader, a member of a church with children and grandchildren.

“Due to my appearances at the commission and in court, my good name has been tarnished.

“I am now regarded as a woman who is a criminal and a thief that has destroyed SOEs.

“I want to give my answers in IsiZulu, for a woman I go to church with to understand.

“My sin is my association with former president Jacob Zuma – part of the Jacob Zuma Foundation. I did not steal any money.”

She was later persuaded to address the commission in English. Asked about meetings between her, consultant Nick Linnell, former Eskom chair Zola Tsotsi and Zuma in 2015, amid allegations that Zuma gave instructions for the firing and suspension of some executives at the power utility, Myeni branded Tsotsi “a liar”.

“Mr Tsotsi should have explained how I got to meet him. He wanted me to facilitate the meeting with Mr Zuma because he was being fired as board chair. I was never in any board at Eskom.

“The person that had a problem at Eskom was Mr Tsotsi who came to me and wanted assistance.

“It is not true that Zuma wanted people to be fired – never gave instruction for people to be hired or fired.”

No load shedding for City Power customers, says utility
11 mins ago
11 mins ago

No load shedding for City Power customers, says utility
11 mins ago
11 mins ago