There is no love lost between the ANC and ActionSA in Johannesburg, but a reference to 'green T-shirts' has incensed the PA too, which is now crying racism. 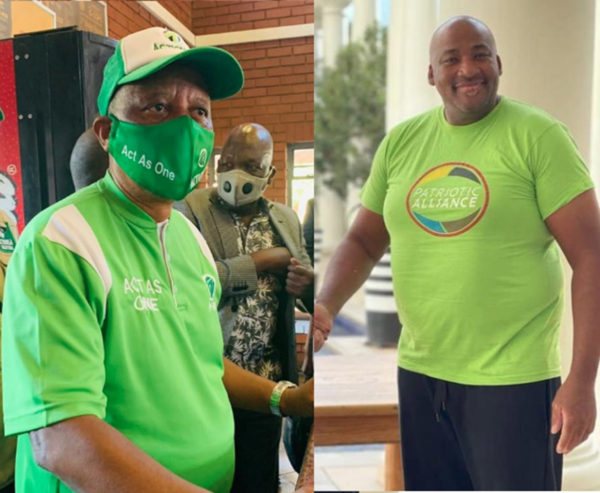 A video clip of Johannesburg mayor Geoff Makhubo discussing the ANC’s election campaign was shared on Saturday morning by a furious Kenny Kunene, who accused the mayor of racism towards coloured people.

In the clip, the mayor can be heard referring to “the new kid on the block”, with green T-shirts, which could be a reference to either or both former mayor Herman Mashaba’s new party, ActionSA, or the Patriotic Alliance (PA), led by Gayton McKenzie.

Makhubo discusses neither party by name but advises the ANC to be alive to “what the new kid on the block is doing”.

“You can ignore them and call them populist, but they are mobilising in our areas in green T-shirts. This accidental mayor and historical factory fault of … called … I can’t even mention him by name. But it’s a reality on the ground.”

In this video speaking to ANC members recently @CityofJoburgZA mayor and @MYANC regional chairman calls @HermanMashaba an accidental mayor and @GaytonMcK a historical factory fault which is a very racist statement to all coloured people. This racist n corrupt jeff must go. pic.twitter.com/n2EkX5w2xE

It’s clear that Makhubo was initially referring to Mashaba, whose biography The Accidental Mayor, was published last year about his years in charge of the city. He had numerous battles with the ANC and Makhubo, the ANC’s regional chairperson, in particular.

What’s less clear is whether Makhubo then referred to McKenzie, whose party entered into a tumultuous coalition with Makhubo’s ANC in the City of Johannesburg after Mashaba resigned in 2019. The PA is closely associated with promoting the interests of coloured voters. Makhubo could still have been talking about Mashaba, though.

Since the PA and ActionSA have similar lime-green party colours, it’s likely there will still be much confusion around which party is which in the years ahead, and which is being referred to as “the green party”.

The PA has enjoyed increased attention over the past few months after winning three by-elections in Johannesburg since November, quadrupling its seats in the city council from the solitary proportional representation seat it won in 2016.

The ANC ejected it from the City’s multiparty governing coalition last year, primarily because of a fallout over the Johannesburg Property Company, where senior managers were accused of facilitating corrupt Covid-19 cleaning contracts. The ANC insisted that their “comrades” be allowed to continue their work without being suspended, and until investigations into them by the Special Investigating Unit were concluded.

The PA claimed to have refused to intervene to bring back the suspended officials and were then ousted by the ANC.

Kunene, a senior member of the PA, was convinced on Saturday morning that Makhubo had in fact been referring to McKenzie and that the term “historical factory fault” was “a very racist statement to all coloured people”.

He called the mayor “racist and corrupt”.

Makhubo has faced numerous allegations of corruption since appearing at the state capture commission, where it emerged his company received millions from companies that were given lucrative contracts by the City.

He told the commission that he wanted to be wealthy, which was why he had entered into the business arena.

Both the PA and the DA have lodged criminal cases of corruption against Makhubo with the police.