Andre de Ruyter referred to ghost vending as economic sabotage of the highest degree and said the investigation "will help restore confidence in Eskom". 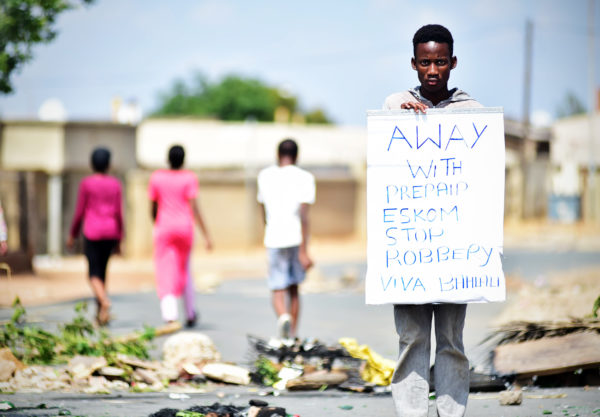 Meadowlands resident in protest against the instalment of prepaid electricity in Soweto in 2017. Photo: Gallo Images/Daily Sun/Lucky Morajane

The Hawks pounced on the suspects, aged 28 to 67, in the early hours of Wednesday in Gauteng. They are expected to appear in the Fochville Magistrate’s Court on Friday, 11 June. The arrests were announced by the Hawks on Wednesday.

According to Hawks spokesperson Philani Nkwalase, the suspects were members of a syndicate operating in groups countrywide generating income of approximately R150 000 to R250 000 per day from illicit sales of electricity.

During their arrest, one of the suspects allegedly enticed the arresting officers with a R100 000 gratification and was additionally charged with corruption, said Nkwalase.

Nkwalase said they were arrested following a project-based investigation that ensued in May 2020 in Bloemfontein, Free State.

What is ‘Ghost vending?’

The project probed the illicit sale of electricity facilitated by illegal vendors who had, in their possession, illegal electricity vending machines.

“‘Ghost vending’ involves the illegal sales and purchases of electricity,” said Nkwalase, adding that the machines were difficult to track because they did not transact on a network or at a single place, but were constantly roving.

He described the syndicate as highly organised, well-equipped and closely networked.

“The illegal practice of selling prepaid electricity results in multi-million rand losses to Eskom per annum. This loss of revenue and the increase in non-technical losses contributes significantly to the electricity woes of the country. These arrests come at a time when the country has been plunged into load shedding due to the bleak power situation”.

Nkwalase said some of the suspects were found in possession of illegal firearms as well as ammunition on top of the illegal machines and were additionally charged.

The National Head of the Hawks, Lieutenant-General Godfrey Lebeya welcomed the arrest and congratulated the investigating team.

“The work of the investigating team is commendable. This work is continuing and the team shall not rest until all the members of this organised criminal group are accounted for.

“Once more, I call upon the community not to buy electricity from illegitimate vendors. May the community be reminded that the Hawks do not accept gratification to negatively influence the cases that they are handling. Those who try to corrupt the members will be arrested and the offered gift forfeited to the state,” said Lebeya.

Eskom CEO Andre de Ruyter commended the persistent and skilful work done by the Eskom investigators and the Hawks. He said:

“This will help restore confidence in Eskom as we continue to fight the scourge of crime that plagues the institution and the country. This is economic sabotage of the highest degree and the perpetrators of such crimes must be brought to book and dealt with to the full might of the law. We shall pursue the investigations together with the Hawks to ensure that the entire operations of the syndicate are disrupted.”

Eskom urges the public to stop buying illegal pre-paid electricity from ghost vendors and to report information regarding electricity theft and fraud, to the Eskom Crime Line number: 0800 11 27 22.