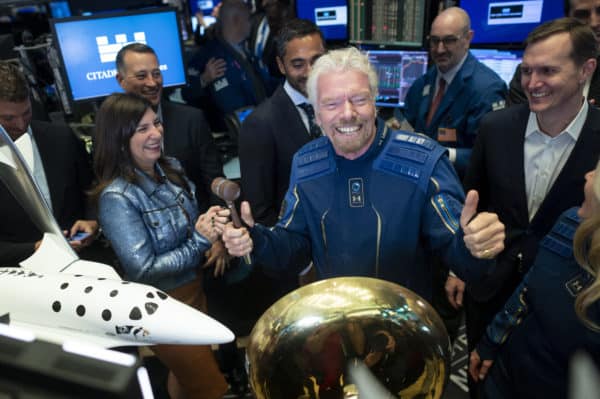 As famous for his thrill-seeking lifestyle and publicity stunts as for his vast business empire, Richard Branson has set his sights on the stars as he prepares for liftoff on his first space flight.

Before this weekend’s mission on Virgin Galactic’s SpaceShipTwo Unity, the avowed Star Trek fan attributed his drive and taste for adventure to his mother Eve, who died from Covid-19 in January.

“I’ve always been a dreamer. My mum taught me to never give up and to reach for the stars,” said the London-born 70-year-old.

The Virgin group boss, whose net worth amounts to $5.7 billion according to Forbes magazine, made his initial fortune in the record industry in the 1970s.

He has since launched a string of successful companies in sectors as diverse as railways and mobile phones, as well as Virgin Atlantic airlines.

But there have been plenty of missteps.

His failures include a short-lived attempt at Formula One racing, a stab at the soft drinks market with Virgin Cola, and a wedding company called Virgin Bride, which some said existed only because of the name.

Branson was said to have been a below-average student who suffered from dyslexia, his headmaster at private school in southern England apparently telling him he would either go to prison or become a millionaire.

He set up Virgin Records when he was just 20 and earned his first million pounds three years later, buying his own Caribbean island a few years afterwards.

The record label’s breakthrough came with “Tubular Bells”, a 1973 instrumental album by the British musician Mike Oldfield, which sold millions of copies.

His mother was an air stewardess, so perhaps he was following in the family footsteps when he set up his airline in 1984.

But his business practices and publicity stunts since then have irked many.

ALSO READ: The race is on: Richard Branson plans to beat Bezos to space

In 2006, it emerged Virgin Atlantic and British Airways had engaged in price-fixing, though his firm avoided any punishment because they tipped off the authorities.

And last year, he asked the British government for £500 million to help Virgin Atlantic weather the economic fallout of the Covid lockdown, despite having paid no income tax in Britain for more than a decade.

Politicians accused him of “milking the system”.

In 2012, a columnist for The Guardian newspaper compared him to the WikiLeaks founder Julian Assange “in that both believe the world revolves around them”.

Ironic as Branson has tried and failed several times to become the first person to go around the world non-stop in a balloon.

At the age of 28, Branson bought Necker Island, where he has hosted lavish parties and getaways for celebrities and political leaders including former US president Barack Obama and his wife Michelle.

Much of Branson’s publicity over the years has been based around his adventuring, in which he has tackled a number of records in speedboats, balloons and even an amphibious car.

These exploits brought him close to tragedy in 1998 when he and his co-pilot were forced to ditch their balloon in the Pacific Ocean after low pressure forced the craft down.

His efforts in recent years have focused on his space tourism company, founded in 2004 and based in the Mojave desert in California.

Branson, who was knighted in 2000 for his services to entrepreneurship, had hoped to join a commercial flight with Virgin Galactic as early as 2009.

But its timeline has been hit by a series of delays including a tragic crash in 2014 that claimed the life of a test pilot.

“Space is hard — but worth it. We will persevere and move forward together,” he said following the crash.