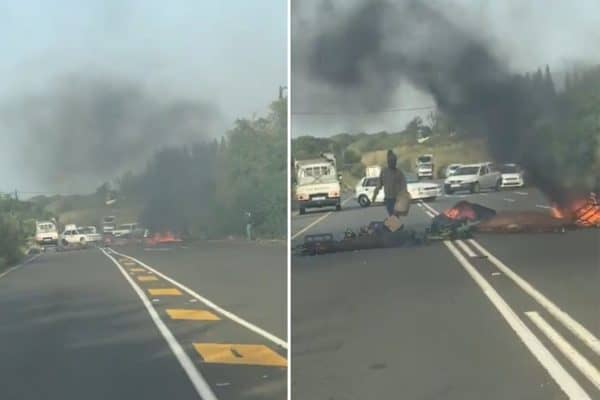 A number of roads in KwaZulu-Natal have been blocked by burning tyres. Picture: Twitter/Screenshot

Police in KwaZulu-Natal said they are on high alert and will be working closely with the National Prosecuting Authority (NPA) to address the cases of looting, arson and damage to national roads in the province.

As of Saturday morning, a total of 25 trucks had been set alight since protests began on 9 July.

Update: As of 12:40 pm, the entire Mooi Plaza roadway remains closed while clean-up operations are underway. North- and southbound traffic are diverted; prepare for slow-moving traffic and delays.

Alpine Road and Umgeni Road towards Connaught Bridge is currently a no-go zone, along with Galleria northbound and Prospection, both north- and southbound.

A truck is on fire in Umgababa, while trucks and debris are still blocking Eshowe roadways, and burning tyres have been placed across lanes on the N3 in the vicinity of Midmar.

Motorists are urged to avoid the following areas as well:

Arrive Alive shared the following road closures update at 11:30am:

This article will be updated throughout the day as new information becomes available.

The KwaZulu-Natal Provincial Commissioner has mobilised police officers from across the province to be deployed in all districts in the province along major routes and key points within each district.

“We will be focussing on enforcing the regulations of the disaster management act more especially the convening of illegal gatherings as well as those that are not observing curfew regulations.”

Moreover, opportunistic criminals used the guise of protests to “enrich themselves by looting shops and other businesses”, and authorities say such behaviour will not be tolerated.

“Police will not tolerate such incidents of criminality and will be dealing harshly with those found flouting the law”.

This follows after a large number of people have already been arrested for arson, looting and damage to public roads since protests first began on Friday, 9 July.

The African National Congress (ANC) issued a statement on Saturday afternoon, expressing its concerned by the ongoing violence.

The ANC condemned the damaging of property and infrastructure as well as the looting of stores “in the strongest possible terms”.

“The ANC recognises and respects the rights of every South African to protest peacefully and unarmed and freely to express their views on any matter of concern. However, in exercising their constitutional rights, citizens must respect the rights of others and refrain from breaking the law or using violence.

“In a constitutional democracy any matters of concern must be expressed through peaceful and legitimate channels. We are concerned that the destruction of property and impeding the functioning of the economy will undermine efforts to create jobs and improve the lives of citizens.”

“Bringing peace and stability to affected areas is a priority for the ANC and the democratic movement.”

Meanwhile, protest action was reported in the East Rand in Gauteng on Saturday morning as Zuma supporters attempt to bring traffic in the province to a standstill.

A ‘Free Zuma’ address is also expected to be held at the Kwamai-Mai in Johannesburg on Sunday, 11 July at 12:00.