The main fire spanned more than 62km in length, with a fire front up to 50km wide, fanned by strong winds. 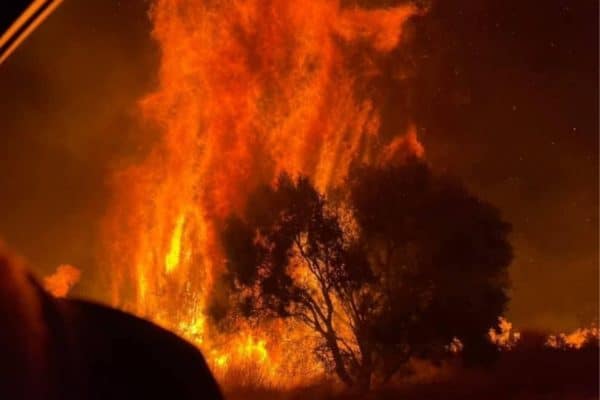 Firefighters and farmers battled to put out fires in the south-west Free State on Monday. Picture: Supplied

Farmers and fire protection association structures in the south-western parts of the Free State fought runaway fires through the night on Monday.

Free State Agriculture (FSA) said in a statement on Tuesday that despite a cold day, winds reached speeds of up to 70km/h, fuelling widespread fires in the Xhariep district.

The largest fires were said to have started near Edenburg, burning over the N1 highway, said FSA commercial manager Dr Jack Armour.

As of Tuesday morning, Breytenbach said active fires were still burning from Edenburg to Tierpoort.

Livestock and game were destroyed and infrastructure severely damaged in the fires. The full extent of the damage is not yet known.

The flames are expected to be contained on Tuesday as the winds die down and more firefighting resources are received, the FSA said.

Working on Fire said in its latest update that some flare-ups occurred throughout the morning on Tuesday, but were quickly contained.

There are still small active fires in the affected areas, but mop-up operations have started.

In May, farmers in the Free State lost an estimated 30,000 hectares of veld in devastating fires.

Around 7,000 livestock were also left with nothing to graze on.

In October last year, 339 farms lost more than 100,000 hectares of land in what locals called the worst fire in years.

From Hertzogville to Boshoff, Dealesville to Hoopstad, it was estimated the region would only recover from the devastation in three years.

Those wishing to assist affected farmers can click here.

Financial contributions can also be made to the FSA by using the following details: