Ramaphosa said the 'Phoenix matter remains front of mind and we want to examine it in all its aspects'. 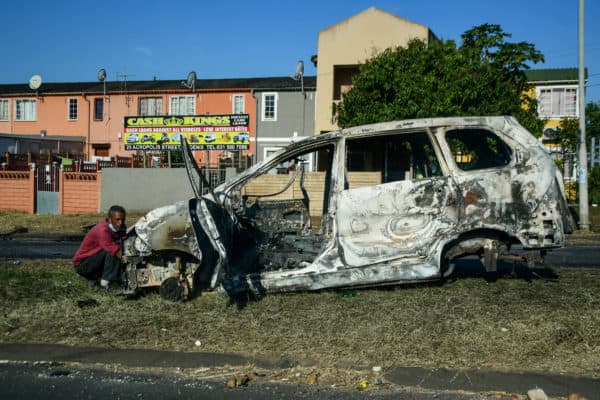 Burnt out cars in Phoenix following violence that has engulfed the community on 15 July 2021 in Durban, South Africa. Photo: Gallo Images/Darren Stewart

President Cyril Ramaphosa has expressed his condolences to the families and friends of the people who lost their lives in Phoenix, north of Durban, in the past few weeks.

Speaking at the Gallagher Estate vaccination centre on Thursday, President Ramaphosa said the Phoenix matter is being examined.

“Obviously, we’re very worried about what happened in Phoenix. It has evoked a lot of feelings on all sides. People’s lives were lost.”

In total 330 lives were lost during the unrest in Gauteng and KwaZulu-Natal.

Of these deaths, 23 were in Phoenix, north of Durban, were suspected vigilantism trumped communities protecting their properties from the looting that left many businesses and buildings gutted.

President Ramaphosa acknowledged the deep hurt that many people are feeling and said government empathises with them.

“Some of the incidents that took place in Phoenix are simply what we don’t want to have in our country, where there was a measure of vigilantism and targeting of people. And so, I also pay my condolences to the people who have lost their loved ones.”

The looting and arson attacks are said to have cost the KwaZulu-Natal economy more than R20 billion, while 150 000 jobs are on the line.

He assured citizens that government was attending to the Phoenix matter at a political level and security and criminal justice structures.

“The Phoenix matter remains front of mind and we want to examine it in all its aspects to see precisely what type of way forward we chart.”

In addition, the President said he has received the report by the Special Investigating Unit (SIU) on an investigation into a contract between the Department of Health and Digital Vibes.

“Have I finished reading the report? Yes, I have. Certain aspects need to be completed and once those are completed I’ll be able to come out and give my view on it,” he told the journalists.