One arrested, another sought for sjambokking of Uber driver

According to social media posts, the Uber driver was allegedly chased by a car before crashing into a tree. 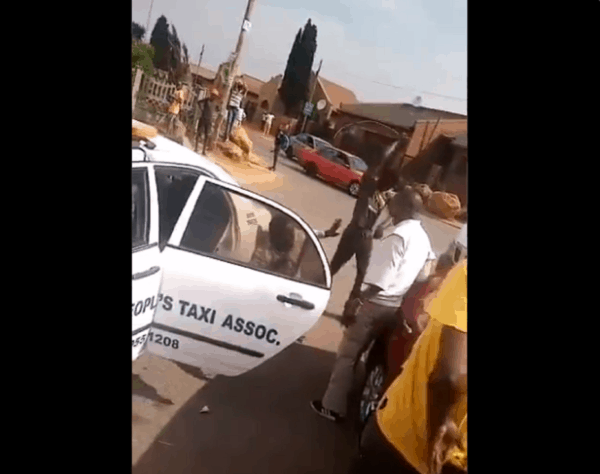 One suspect nabbed, another sought for allegedly assaulting Uber driver in Katlehong

One suspect has been arrested while another is being sought by the South African Police Service (SAPS) after an Uber driver was assaulted in Katlehong on Thursday.

In video footage that has been circulating on social media, a man is seen being whipped by two men with what look like sjamboks before being forced into a car with the words “Katlehong People’s Taxi Assoc.” written on it.

According to social media posts, the Uber driver was allegedly chased by the car before crashing into a tree.

All this for picking up a passenger.

Gauteng MEC for Public Transport and Roads Infrastructure Jacob Mamabolo has condemned the attacks on the Uber driver.

“I am appalled by the level of savagery and hate displayed by the individuals who perpetrated this act of violence. These acts are unacceptable and must be condemned. We pledge our solidarity with the victim and wish him a speedy recovery,” said Mamabolo in a statement following the incident.

He has called on law enforcement to arrest anyone who was involved in the crime.

“We have come a long way as a province in dealing with minibus taxi violence. This incident is an affront to the efforts of so many peace-loving people within the taxi industry and the people of Gauteng. These individuals should face the full might of the law,” said Mamabolo.

“Together with the provincial South African National Taxi Council and the Gauteng National Taxi Alliance and their various associations, the Gauteng provincial government has availed platforms for dispute resolution in an effort to avert violence as a means of resolving problems in the public transport sector. We have made tremendous progress in this regard.

“All our interventions in the taxi industry were to ensure that the industry sheds its negative public perception and takes its rightful place in the public transport value chain.”