Four crew members and five passengers believed to be of German nationality were on board at the time. 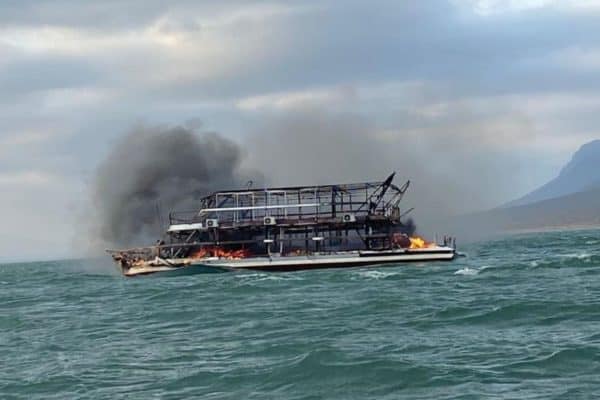 Tourism Minister Lindiwe Sisulu has extended her condolences to the families of two people who lost their lives following a fire that broke out on the Shayamanzi luxury houseboat in Jozini, Kwa-Zulu-Natal.

“I am deeply saddened by this incident and wish to convey my sincere condolences to the families and friends of the deceased,” said Sisulu in a statement.

“We stand by the two families as they come to terms with this untimely and sudden loss,” she said.

The South African Maritime Safety Authority (Samsa) is investigating the cause of the fire.

The incident on Sunday, 10 October, claimed the lives of a crew member and a passenger. One crew member who is still missing has been presumed dead.

A search and rescue operation for the missing crew member is still ongoing.

Nine people were on board the boat at the time of the fire.

Samsa has now revealed the luxury houseboat was on a two-night cruise on Lake Jozini.

Four crew members and five passengers believed to be of German nationality were on board at the time.

The vessel allegedly caught fire as it was passing Crocodile Bay.

One of the deckhands noticed smoke coming out of the engine compartment. When the crew investigated the source of the blaze, they discovered that one of the engines had caught fire.

Crew members on board also reported powerful winds blowing at the time, which could have exacerbated the problem.

The crew and one of the passengers desperately tried to put the flames out, but all attempts failed and the fire spread rapidly within the compartment and to the upper deck.

Desperate crew and passengers were forced to abandon ship.

“As a long-established family-owned business, we are devastated and are doing everything possible to understand and support the investigation and impact on our guests, crew and their families,” Shayamanzi luxury houseboats said in a social media post.

“On behalf of the Shayamanzi Team our sincere condolences. Our thoughts and prayers are with you. We mourn with you.”

The Shayamanzi I houseboat that burned down was first launched in 2002. It was a 25-metre-by-eight-metre double pontoon boat with six en-suite cabins and an eight-seater jacuzzi on board.

The investigations are ongoing.

Samsa has also conveyed condolences to the crew members and passengers families and promised to complete investigations as soon as possible.