Have your gadgets been acting up? Well, you can blame the sun for burping on us

A Solar flare from Saturday is now reaching earth, leading to the SA National Space Agency issuing an alert for possible high-frequency disruptions. 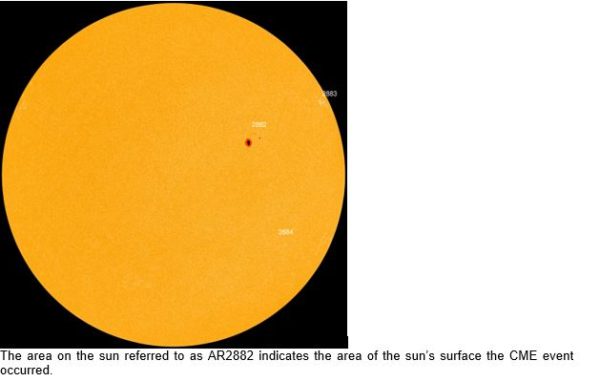 The South African National Space Agency (Sansa) has issued an alert for possible high-frequency disruptions in South Africa following a solar eruption from our sun.

Every so often, the sun ‘burps’, with the power equivalent to 20 million nuclear bombs.

These hiccups are known as coronal mass ejections or CMEs.

These are potent eruptions near the surface of the sun and appear as sunspots on its surface.

The resulting shocks ripple through the solar system and can disrupt satellite operations and power grids on Earth.

The eruption which took place on 9 October, occurred at the part of the sun that directly faces Earth.

The solar flares or CME from that eruption is now showing their effects on the Earth’s magnetic field.

Magnetometer readings around the world are showing moderate disruptions.

A disturbance of this size is a G2 storm on the NOAA scale. NOAA is the National Oceanic and Atmospheric Administration, and its headquarters are located in Boulder, Colorado, USA.

A G2 storm can disrupt communication with spacecraft and require updates to satellite position calculations from increased drag.

“South Africa is at 35 degrees latitude, so the forecast for local radio disruption and power systems impact is minimal,” said Sansa in a statement.

The SANSA Space Weather Centre continuously monitors solar activity and provides alerts on impacts that affect technology and operations in the country.

The K-index is a measurement of the disturbance of the magnetic field relative to a quiet day.

Values of K less than four are ordinary wiggles in the Earth’s magnetic field. Values higher than 4 indicate storms of increasing strength.

“At the storm’s peak, Earth experienced a planetary K-index of six, while Sansa observed a slightly lesser K-index disturbance of five,” said the Space agency.

The local geomagnetic disturbance was at the G1 storm level based on Hermanus data, but globally a G2 storm was observed.