However, spokesperson of the veterans Lwazi Mzobe has denied that doors were being barricaded in the meeting venue and that Modise was being held hostage. 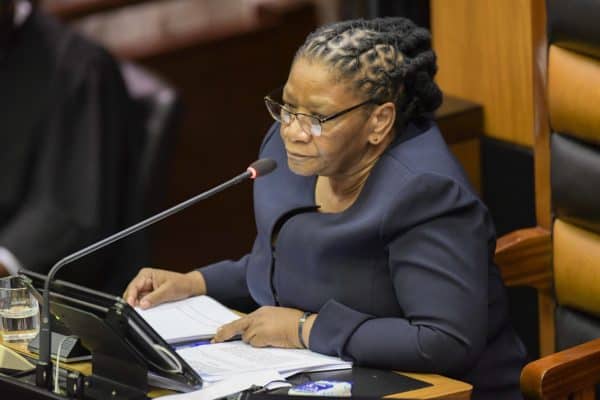 The group comprising the Liberation Struggle War Veterans (LSWV), Apla and Azanla, reportedly got angry after they were promised a meeting with Deputy President David Mabuza, but got Modise and Minister in Presidency Mondli Gungubele and Deputy Defence Minister Thabang Makwetla instead, Newzroom Afrika reports.

The group was calling for a meeting with President Cyril Ramaphosa tonight, accusing Modise of not adequately responding to their grievances.

However, spokesperson of the veterans Lwazi Mzobe denied that doors were being barricaded in the meeting venue and that Modise was being held hostage.

“Thandi Modise is new to her portfolio and would not be able to fix the problem. There are no barricades, she is not being held hostage. She can come and go as she pleases, we just want a meeting with President Cyril Ramaphosa. They’re under no security threat,” Mzobe told the news channel.

The veterans are demanding R4.4 million in reparations each, including a housing allowance, for their children and wives to have medical aid benefits and children to be put through tertiary education, among other demands.

According to the news channel, the special forces of the military stormed into the building and freed Modise and her team, with a number of injuries reported after they used stun grenades.

57 people have since been arrested.

On Tuesday, ANC spokesperson Pule Mabe said in a statement that the military veterans would meet with Mabuza on Thursday, and said their demands were being processed by the government.

“The process started by President Cyril Ramaphosa to address the grievances of military and war veterans must be supported, so as to expeditiously address legitimate grievances of veterans,” said Mabe on Tuesday.