ANC is too big to fail, says Mbeki

The former president has called on the ruling party to elect leaders who will manage the resources and use them responsibly. 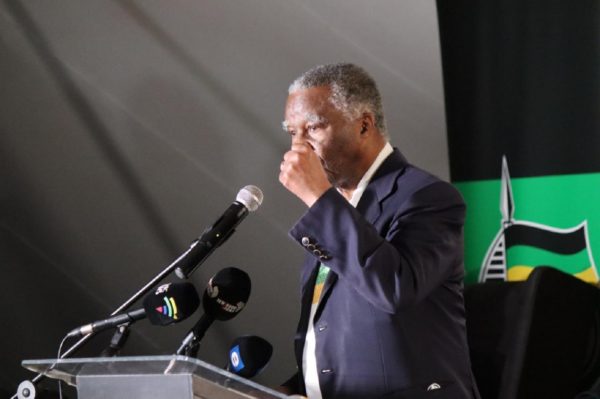 Former president Thabo Mbeki has called on the African National Congress (ANC) to responsibly respond to the cries of the people it claims to serve and not just promise “to do better”.

“The ANC is too big to fail, because if it fails, the country will collapse,” said Mbeki.

Addressing a meeting of business people and professionals in Emoyeni, Parktown, on Thursday evening, Mbeki reflected on the failures of the ruling party and also called on it to pull up its socks and fulfil the promises made to the people during the elections.

Mbeki said by promising to deliver water, build clinics, roads and schools, the ANC is indirectly telling the people that the resources to deliver on those promises are there, and should therefore also focus on implementing its plans to ensure the resources are there.

Where are the resources going to come from?

Mbeki commended the pledges by business to invest R1 trillion in the country over three years, but questioned if the pledges have produced anything tangible. He also called on the government to play its part in investing in the country as that was the only way to get the resources to fulfil the promises made ahead of the elections.

“We need a social compact to produce a common plan which will be binding on all of us. We must urgently finalise the social compact between social partners to achieve our country’s fundamental social transformation to reduce and eradicate the plague of unemployment, poverty and inequality. That in truth is where the resources will come from. If this is done, as it has to be done, then we will generate the resources that are needed in order to deal with these problems which are very legitimately raised in the local municipalities,” said Mbeki.

“We must, as social partners, get together and produce these funds to invest in this economy because if we don’t do that, these resources to meet these commitments that are here, they won’t happen if we don’t attend to this matter. All of us as South Africans must say we are going to see to it that the ANC keeps these commitments, because without it, the country will sink.”

The quality of leaders

The former president also called on the ruling party to elect leaders who will manage the resources and use them responsibly, which has not been the case in the past few years.

As a result, the ruling party is now identified with corruption.

“We have to find a way of ensuring that the quality of people who will manage these things. We are asking you to elect leaders who are responsible. Over the years, the quality of the membership of the ANC has degenerated and it’s a problem the ANC leadership has recognised for a very long time, that this leadership is changing. In the end, there must be renewal because ANC is being identified with corruption,” said Mbeki.

“If the ANC is not renewed, how do you trust an organisation like that to choose the candidates that we want? We can’t. A properly functioning branch of the ANC would not need to take special measures to understand the community in its ward. If you’re an active member of the ANC properly in touch with the people every day, you would know what kind of candidate would be welcomed in the community, but because we don’t have ANCs of that kind, we had to get into these matters, so we called the communities, communities please help us. I’m saying it was an acknowledgement of the reality.

“There are people who are very good at singing struggle songs and toyi-toying but they’re not ANC. If the ANC misbehaves, it has implications on the country. The ANC is too big to fail because if it fails, the country will collapse. We as the country must keep the ANC to its promise, if this doesn’t happen, the country is dead.”