Archbishop Desmond Tutu to be cremated on Saturday

For the remainder of this week, the bells of the Cathedral will be rung every day for 10 minutes, starting at midday. 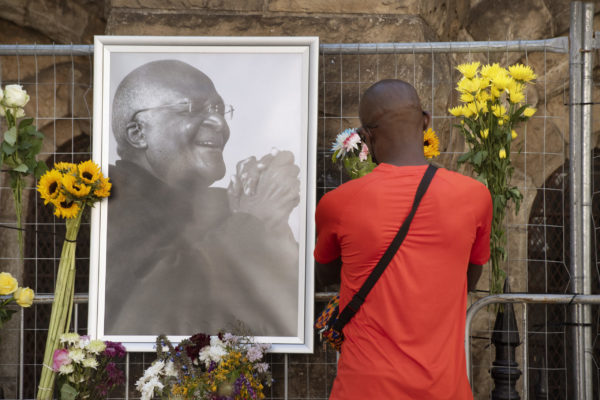 A mourner brings flowers to St. Georges Cathedral, where a Wall of Remembrance for South African anti-apartheid icon Archbishop Desmond Tutu has been set up. Photo: AFP/Rodger Bosch

St George’s, also known as the ‘People’s Cathedral’, played a vital role in the resistance against apartheid.

Thabo Cecil Makgoba, the South African Anglican archbishop of Cape Town, announced on Monday that Tutu will be cremated.

ALSO READ: ‘He fought for us’: Tears and memories of ‘hero’ Tutu

While more than 400 people said they would want to be in attendance on Saturday, Makgoba encouraged people to adhere to Covid-19 protocols and watch the funeral procession via live stream instead.

Speaking at the press conference, the Dean of the Cathedral Michael Weeder said Archbishop Tutu’s ashes will be interred at the mausoleum at the Cathedral, in a designated spot.

Those who wish to pay respect to the late Archbishop while he lies in state may do so on Friday. However, access will be limited to 200 people due to Covid-19 restrictions.

For the remainder of this week, the bells of the Cathedral will be rung every day for 10 minutes, starting at midday. Makgoba asks all who hear the bells to take a moment and pay tribute to the late Archbishop.

A memorial service will be held at the Diocese of Pretoria and the South African Council of Churches on Wednesday.

A purple tribute to Tutu

Meanwhile, Cape Town will be drenched in purple to honour Tutu’s legacy.

Table Mountain, City Hall and St George’s Cathedral will be illuminated in purple light to remember “Cape Town’s greatest resident and all that he stood for”, mayor Geordin Hill-Lewis said in a statement.

“I hope also that the image will be a reminder to the world of the great challenges South Africa has overcome, of the great people who helped us to overcome those challenges, and that by following in the Arch’s example, every one of us can also make a positive difference in the world,” Hill-Lewis said.