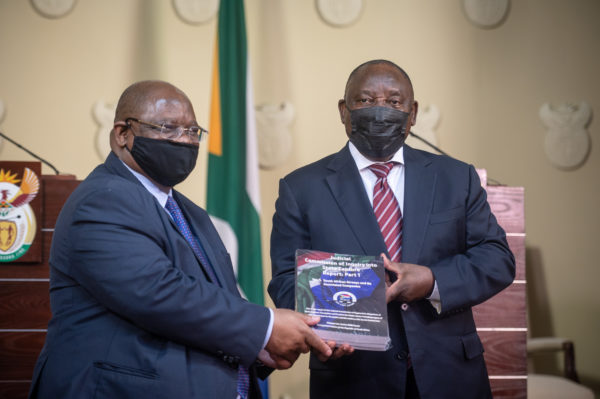 Acting Cheif Justice, Raymond Zondo and President Cyril Ramaphosa at the Union Buildings where the first part of the state capture report is handed over to the Presidency, 4 January 2022, Pretoria. Picture: Jacques Nelles

The first of three parts of the report from the Judicial Commission of Inquiry into Allegations of State Capture was on Tuesday handed over to President Cyril Ramaphosa by the commission’s chairperson, Acting Chief Justice Raymond Zondo.

Zondo explained the part of the report handed over forms part of three volumes.

It was confirmed that each part of the report will be released to the public immediately after it is received.

Members of Parliament (MPs) are not buying into the Department of Public Works and Infrastructure (DPWI) report that all fire response systems were functioning and that maintenance at the National Assembly was up to date.

Fazel reiterated that all systems were fully functional and tested before the 2 January fire.

De Lille said the Hawks are now in possession of the CCTV footage which is part of the investigation into the fire.

The attorney of the 49-year-old man arrested in connection with the Parliament fire has accused government of scapegoating his client, who made his first court appearance on Tuesday.

Zandile Christmas Mafe’s case was postponed for further investigations after a brief appearance in the Cape Town Magistrate’s Court.

Speaking outside the court, advocate Luvuyo Godla, who is representing Mafe on a pro-bono basis, said “the executive and legislature” was looking for a scapegoat to take the fall for their own incompetence.

BlackBerry reaches the end of its life

BlackBerry devices using the company’s original software and services will no longer work from 4 January 2022.

The company announced that devices operating on BlackBerry 10 and BlackBerry 7.1 software will not be able to reliably function on carrier networks or on Wi-Fi. This means that the phones will no longer be able to make phone calls, use data, send text messages or even make emergency calls.

Frosty relations signs of a looming cold war with Zimbabwe?

Relations between South Africa and Zimbabwe appear to be deteriorating at an alarming rate following the decision by the Department of Home Affairs not to renew exemption permits for hundreds of thousands of Zimbabweans residing in South Africa.

The so-called Zimbabwe Exemption Permits (ZEPs) expired on December 31, leaving an estimated 250 000 Zimbabweans at risk of losing their jobs, their bank accounts and of being deported.

This decision is being challenged in court by the ZEP Holders Association and NGO Amity Africa, which argue that holders of the now expired ZEPs are entitled to be awarded permanent residence status in SA.

In this week’s royal news update, the palace confirmed that Princess Charlene of Monaco is still some months away from a full recovery, Prince Andrew’s attorneys are expected to argue that a once-confidential settlement between accuser Virginia Giuffre and late disgraced financier Jeffrey Epstein protects Andrew from litigation, and Queen Elizabeth II will be appointing her daughter-in-law Camilla, a member of the ancient Order of the Garter.

The High Court in Johannesburg has struck an urgent application to interdict President Cyril Ramaphosa from receiving part one of the Zondo Commission’s report into state capture of the court roll.

DIA had argued that the president should not be the one to receive the report because he’s been implicated in wrongdoing through testimonies and evidence at the commission.