He also gives R2 000 worth of monthly groceries to recipients. 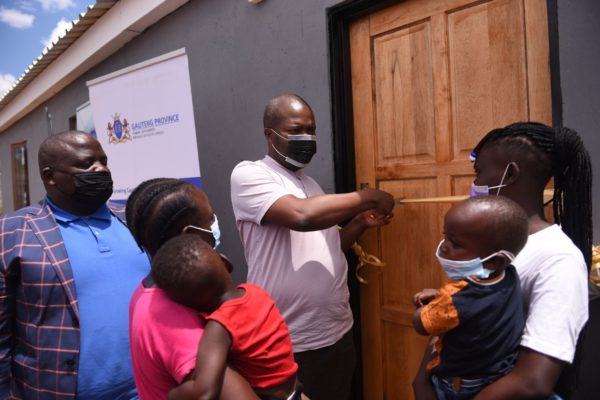 There were tears of sadness and songs of joy when Chippa United Football Club boss Siviwe Mpengesi celebrated
his life’s good fortune by handing over new brick houses to people who had been living in shacks.

During a home handover ceremony, Grace Msimanga burst into a song – uChippa lo Abamaziyo, abazange bambone (this is Chippa to those who know him, some have not seen him).

“I thank Mr Mpengesi. May the Almighty bless him with more things in life, for what he has done for us,” said Msimanga. Another beneficiary, Monica Ngoepe, added: “No one could have done what you did.”

But, in the case of Nkele Modiba, she wept. Devastated at the loss of her mother three years ago, followed by the family shack dwelling being gutted by fire, little did 24-year-old Modiba imagine her dream would come true this year – to live in a fully furnished, modern, brick, two-bedroomed home.

Thanks to Mpengesi. Reliving her hardship when her mother died, Modiba told The Citizen how “things changed
when our breadwinner passed on”.

“With no one employed and [with] young children to look after, things became tougher and I always had to call aunt Maria to ask for help, because life was like hell.

“We lived and grew up here, but then the shack was gutted by fire because our brother is a glue smoker.”

She went on: “He always fought with us after drugging himself with glue, leading to me sustaining a head injury. But he now lives in an outbuilding, outside the home.”

She said Mpengesi “has given us our dignity back and made my dream come true by giving us something that we can now proudly call home – no longer experiencing water leaks from the roof when it rains.

“We also very much appreciate the R2 000 worth of monthly groceries from [Mpengesi’s] company, Chippa Holdings, which we are getting for the entire year.”

She summed it up: “We owe our new life to him.”

Mpengesi’s generosity yesterday saw fundamental changes to the lives of the three poverty-stricken families in
Hammanskraal.

Humbled by the community response, Mpengesi related a story of his own hard upbringing.

“I used to live and suffer like some members of this community – living in a shack and sleeping under the bridge,” he said.

He then asked: “Should I have used my money to build myself a mansion or to buy myself a Maserati? I chose to do what I am doing, because I used to live under similar conditions.

“One day, God gave me an opportunity. This is what I enjoy most.”

Football is just one of the businesses of Chippa Holdings. The company is also involved in transport and construction.

He added: “Don’t only help when you have made a profit – make sacrifices to help other people.”

“When the call came, saying here is a family with no place to stay, I remembered the time when I use to sleep under the bridge. This does not mean I have a lot of money – just that I can’t be rejoicing when people are suffering?”

Although the needs in this country are great and “the problem is that you cannot help everyone”, said Mpengesi, “through our social responsibility programme, we have built 20 homes in the Western Cape, Free State, Gauteng and the Eastern Cape because of our belief that South Africa is one [nation].”

In Hammanskraal, “we provided the material to build these houses and trained local people on how to build them”, he said.

“We are determined to assist struggling communities and partner with government to overcome the challenge of the housing backlog.

“We are also assisting communities by providing temporary shelters in Buffalo City after it was hit by heavy flooding.”

Mpengesi has given some destitute families in Hammanskraal, north of Pretoria, more than just a roof over their heads.

“No smell here from the toilet at all,” said one of the lucky beneficiaries, Grace Msimanga.

With the help of a bio-matrix, faecal matter is separated into liquids and solids.

The solids are broken down into natural fertiliser by bacteria earthworms in the bio-matrix. A simple charcoal filter cleanses the liquids that can seep away harmlessly and odourfree into the ground.

The biodigester tank only has to be emptied every five years, reducing the risk of overflow and surface water contamination.

Bonga Mlambo of Sanitation Solutions explained: “At the back of the toilet, we have a biodigester which is a magic tank – which disintegrates the human waste after having been inoculated with the bacteria.

“The water or the human waste is contained in the biodigester that is there.

“With this technology, you can eliminate environmental problems with regard to pollution – like groundwater pollution, which you find with a lot of toilets in the market today.

“In the case of pit latrines – seen in many rural areas – you have to dig something like 1.8m into the ground. That is when you start tampering with the water level.

“[Like this] you also don’t need to have a sewer network.”