There's a storm brewing and the forecast looks promising for an explosive affair in the "Triple Thunder" bill which is set to take place at Emperors Palace on Saturday night. 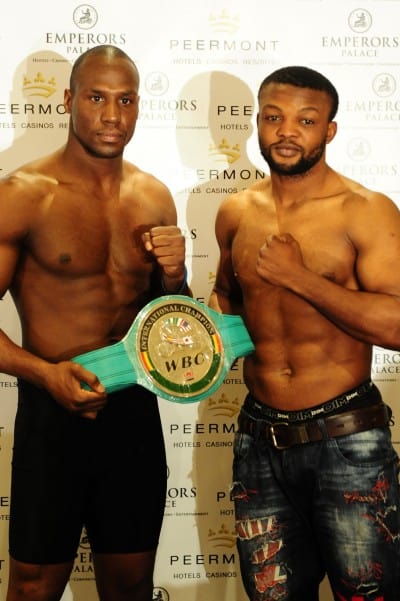 Eric Fields and Ilunga Makabu during the press conference and weigh-in held at Emperors Palace in Kempton Park, 27 August 2013 to promote the Triple Thunder boxing tournament, to be held on the 31 August. Picture - Neil McCartney

Although yesterday’s pre-fight medical was something of a meek affair with all fighters treating their opponents with the utmost respect, that will no doubt dissipate when they cross the ropes and do battle.

The main event will see Ilunga “Junior” Makabu lace up to defend his WBC silver cruiserweight title against Eric Fields on a night that will see a first for boxing in South Africa with three title fights under the organisation’s banner taking place. Makabu will be making the first defence of the title he won in Monte Carlo last month. 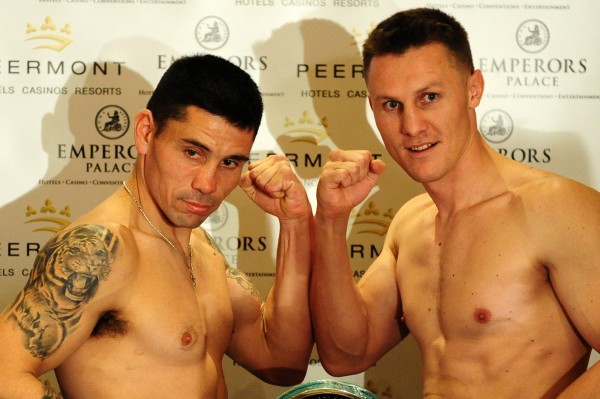 Gabriel Ramirez and Ryno Liebenberg during the press conference and weigh-in held at Emperors Palace in Kempton Park, 27 August 2013 to promote the Triple Thunder boxing tournament, to be held on the 31 August. Picture – Neil McCartney

“Junior is one of those fighters who fights better when given a better quality opponent. He’s in good shape and I expect a stoppage,” trainer Harold Volbrecht said yesterday. But Fields appears to have other ideas with the American fighter and his connections appearing quietly confident of pulling off victory.

“I respect the man but I want to tell him that I’ve trained really hard for this fight,” Fields said. Another fighter who looks to have been matched against a higher quality opponent is Ryno Liebenberg. The unbeaten light-heavyweight will clash with Argentina’s Gabriel Ramirez for the vacant WBC international silver title.

In the evening’s final WBC title fight, Nkosinathi Joyi will be looking to dethrone Benezer Alalod of the Philippines when the two clash for the organisation’s international junior-flyweight title.