Bekker in the three-way tie at Wild Waves Challenge event

Oliver Bekker narrowly missed out on taking the sole lead after the opening round of the Sunshine Tour's Wild Waves Golf Challenge on Tuesday, after missing a birdie put on the 18th hole. 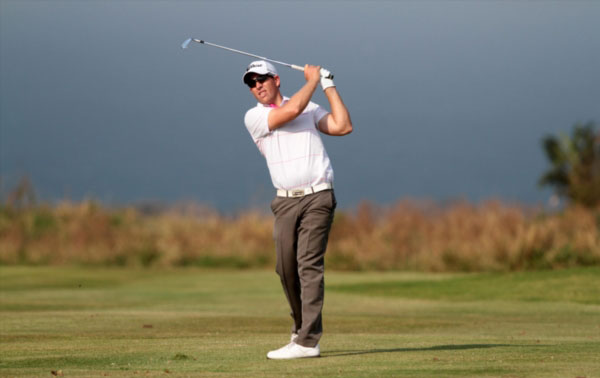 Bekker’s put circled the hole without dropping, leaving him with a three-way share of the lead, with a six-under-par 64 with Ruan de Smidt and Christiaan Basson. “I was very surprised when it didn’t go in,” Bekker said after his round.

“When it was about a foot-and-a-half, I thought it had to go into the hole. It’s a little disappointing, but it wasn’t an easy putt with a bit of break on it. “I felt a little bit hard done by on the last three holes.”

Bekker three-putted for par on the 16th, having reached the green in two strokes. He then hit the flag-stick on 17, before the disappointment on the last hole.

Despite the setbacks, Bekker said he was pleased with his effort and was looking ahead to his second round on Wednesday. “If you’d offered me 64 at the beginning of the day, I would have taken the day off,” he jokingly remarked.

De Smidt started well, scoring four consecutive birdies from the 12th to 15th holes, before he dropped a shot on 16. “I went back to my old putter, and the putts have started dropping,” De Smidt said of his round.

Playing with De Smidt, Basson kept up with the leaders but said he was unfortunate not to have had more putts fall into the cup. “On my back nine, things were really going my way,” he said.

“I made one or two nice putts. I wasn’t far off in the opening nine… I was just missing them. Sometimes they drop and sometimes they just go over the edges.” The three leaders had a one-stroke lead over four players, including Jeff Inglis, Daniel Greene, Titch Moore and Desvonde Botes.