China was 'saddened to know that the recent heavy rainfall and floods in KZN have resulted in significant casualties and property losses'. 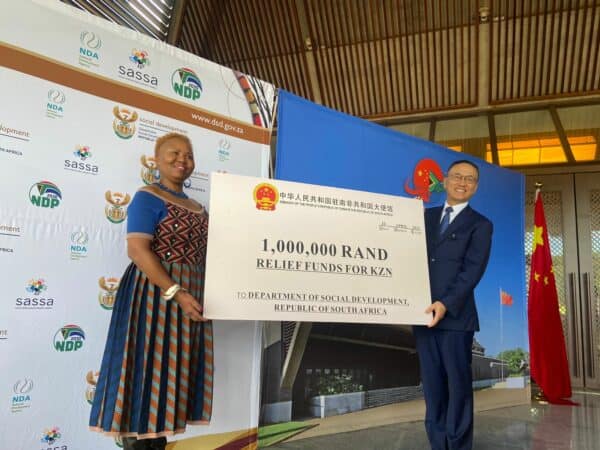 In one of the first major international financial support to be received by South Africa – destined for assistance in the raging catastrophic floods to have hit KwaZulu-Natal – the People’s Republic of China on Wednesday donated R1 million towards the disaster fund.

This followed a message of condolence sent this week by Chinese President Xi Jinping to his South African counterpart, President Cyril Ramaphosa, acknowledging damage caused by floods, which led to over 400 deaths, massive damage to property and infrastructure.

Jinping expressed deep condolences to the victims of the disaster and sympathies to bereaved families.

Addressing a ceremony in Pretoria to hand over the cheque, accepted by Social Development Minister Lindiwe Zulu, Chinese ambassador to South Africa Chen Xiaodong, said China was  “saddened to know that the recent heavy rainfall and floods in KZN have resulted in significant casualties and property losses”.

Said Xiaodong: “The Chinese people’s thoughts and prayers are with KZN.

“President Xi Jinping sent a condolence message to President Ramaphosa on behalf of the Chinese government – deep sympathy and sincere condolences to all South Africans affected by the disaster.

“President Jinping pointed out that China and South Africa have special friendly relations. China shares the feelings of South Africans that are suffering from the disaster.

“President Xi Jinping also said that under the strong leadership of President Ramaphosa and the government, people in the affected areas will overcome the disaster and rebuild their homes at an early date.

“Floods are merciless and it takes solidarity to emerge from them.

“China and South Africa are comprehensive strategic partners with each other and our traditional Comrades plus Brothers friendship has seen strong for a long time.

“In the face of major natural disasters like this, China and South Africa have always stood by and fought together with each other.

“As we together confront the floods that are unseen in decades, the Chinese side is ready to provide assistance to your side within our capacity.”

China has pledged to make more funds and supplies available to the stricken area through various ways, including mobilising Chinese enterprises and communities in South Africa.

“With the great leadership, it is our belief that the people of KZN will overcome the disaster and come back to normal life at an early date,” added Xiaodong.

In accepting the funding, Zulu said: “On behalf of the people and the Government of the Republic of South Africa, we extend our deepest gratitude to the government of the People’s Republic of China for this generous donation, which will enable us to meet the immediate needs of hundreds of families affected by recent floods, including people who are displaced from their homes to get back on their feet.”