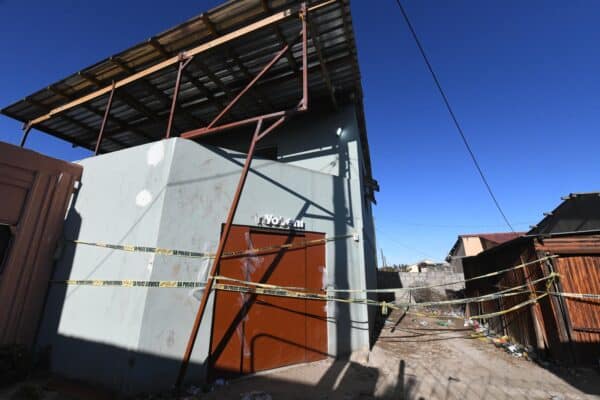 Enyobeni Tavern where 21 teenagers who died during the early hours of Sunday morning on 27 June 2022 in East London. Picture: Gallo Images/Die Burger/Lulama Zenzile

The owner of the Enyobeni tavern in Scenery Park, East London, where 21 teenagers died more than two weeks ago, has been arrested along with two employees.

According to Eastern Cape police, the arrests were made on Saturday and Tuesday respectively, by a team of detectives.

Police spokesperson, Brigadier Tembinkosi Kinana, said the arrest of the 52-year-old suspect and two employees, aged between 33 and 34, followed a criminal complaint laid by the Eastern Cape Liquor Board (ECLB) at Scenery Park Police Station for contravention of the Liquor Act.

National Police Minister Bheki Cele says South Africans should have faith in the police because officers thwarted further attempts to destabilise the state after the disastrous 2021 July riots.

Cele, who was speaking on Talk Radio 702, said not much has been said in the press about that particular policing win, but he revealed that SAPS had been instrumental in preventing another massive shutdown that was planned for August 2021.

Former Transnet group chief executive Siyabonga Gama and his four co-accused made a brief appearance in court on Wednesday, on charges of contravention of the Public Finance Management Act (PFMA), fraud, corruption, and money laundering.

President Cyril Ramaphosa has squashed the suggestion that he should testify at suspended Public Protector Busisiwe Mkhwebane’s impeachment hearings.

Proceedings into Mkhwebane’s fitness to hold office kicked off on Monday, with some people having already testified at the Section 194 Inquiry.

The suspended Public Protector is the first head of a Chapter 9 institution to face a parliamentary inquiry.

The Presidency on Wednesday said it “strongly refutes the false claims made by Advocate Malesela Teffo” that the office was behind his alleged intimidation which has led to his withdrawal from the Senzo Meyiwa trial.

Teffo – who withdrew as a legal representative for accused one to four in the murder trial – cited harassment from the police, the National Prosecuting Authority, as well as the state and Judge Tshifhiwa Maumela.

South Africans are looking for a real alternative, not another political party

South Africa’s Electoral Amendment Bill continues to be a talking point among many. Among those taking part in the discussion, is former DA leader, Mmusi Maimane.

The Constitutional Court recently granted Parliament a six-month extension of the deadline to amend the Electoral Act, to allow independent candidates to stand in national and provincial elections.

As part of an aggressive strategy to address unemployment – by enhancing productive forces and industrialisation – the SA Communist Party (SACP) wants to see huge investment in manufacturing industries and infrastructure.

This, through prescribed assets, could see trillions in retirement and pension funds being ploughed in projects that could inject growth in the South African economy, according to outgoing SACP general secretary Blade Nzimande – part of his tabling on Wednesday of the party’s 14th congress central committee political report to the 15th national congress being held in Boksburg.

The third season of Kelly Khumalo’s reality show on Showmax has not shied away from the hot topics and in the latest episode, the musician heavily criticised the media.

She has openly talked about the Senzo Meyiwa murder trial, and what an amazing father he was, including divulging more information on her contentious relationship with Molemo “Jub Jub” Maarohanye, the father of her first child – Christian.

Bafana pay the penalty as they bow out of Cosafa Cup

Helman Mkhalele’s Bafana Bafana have bowed out of the Cosafa Cup following their 5-4 penalty shootout loss to Mozambique at King Zwelithi Stadium on Wednesday.

The game had to be decided on penalties after the teams played to a goalless draw in regular time.

Bafana have only themselves to blame for going to penalties and losing the match, with the home team having created a better chances and could have at least got one goal.

Mhango feeling happy at AmaZulu after his switch from Pirates

Striker Gabadinho Mhango joined his AmaZulu FC teammates for the first time in training on Tuesday following his switch from Orlando Pirates and he says being at the club is an amazing feeling for him.

The former Pirates striker’s arrival at the Usuthu camp was delayed because he was with Malawi at the Cosafa Cup.

Now, finally having met his new teammates and having had his first training session ahead of the 2022/23 DStv Premiership season, Mhango says this is something that he has been looking forward to since his departure at the Soweto giants.