EFC Africa heavyweight champion Andrew van Zyl isn't nicknamed "One Gear" for nothing and it's something Sors Grobelaar will be wary of when the two clash at EFC 23 at Carnival City tonight. 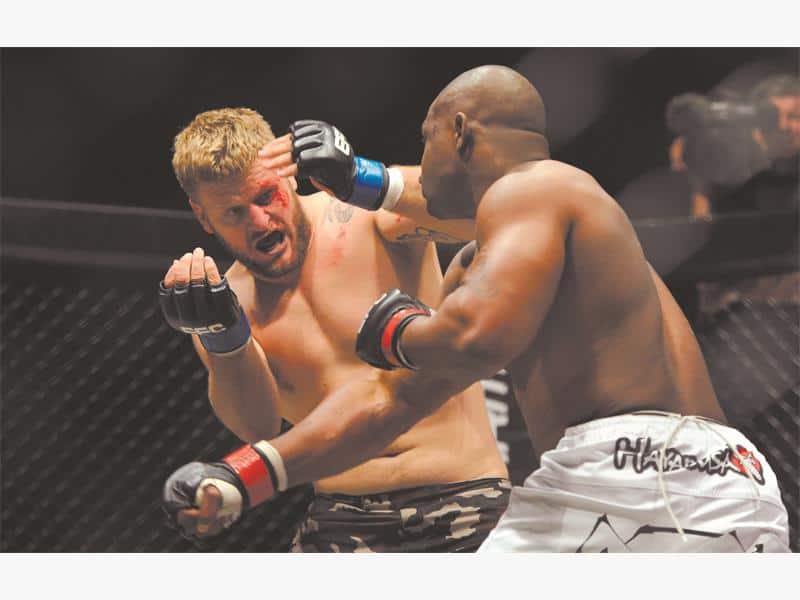 BULLISH. Andrew van Zyl, left, is confident that he can retain his heavyweight title against Sors Grobelaar at EFC Africa 23 at Carnival City tonight. Picture: Backpagepix

To date, Van Zyl only has a single blemish on his record after going down to Ruan Potts back in 2011, but he avenged that defeat in a rematch by not only settling the score, but also by claiming the heavyweight title.

The champion now faces a new proposition in Grobelaar who is renowned as a heavy hitter, having felled many opponents with his fists and deceptively quick striking game. It’s hard to imagine a man who tipped the scale just over 115kg yesterday being that agile, but Van Zyl has the chin to stand up to the challenge.

“I’ve put in the same work. The same amount of effort has gone into retaining this. In my mind, I think it will be very difficult for him to beat me,” Van Zyl said yesterday. “He’s got some decent striking ability and it’s going to be a challenge, something to contend with, but I’m not scared to stand with him.”

While he has several weapons in his arsenal, it’s his ground game that is the biggest advantage for the champion who could use his brown belt in Brazilian Jiu-jitsu (BJJ) to full effect. “I think he’s very much kickboxing based. His wrestling and BJJ is quite limited,” Van Zyl said of his opponent.

The main supporting bout will see Michiel Opperman look to become the first man to successfully defend the EFC’s welterweight title when he steps into the hexagon against Dino Bagattin.

The rest of the main card bouts will see Boyd Allen prove his credentials against the experienced Wesley Hawkey when they clash in their featherweight bout while Martin van Staden will be looking to lay on the hurt against a tough as nails Henry Fadipe in their welterweight clash.

Wilhelm “Tiny” Strauss will meet Vandam Mbuyi in a heavyweight bout that will get the 8pm main card underway.