The middleweight division is regarded as one of the most vibrant in the Extreme Fighting Championship and it was clear to see why on Thursday evening as the championship belt changed hands. 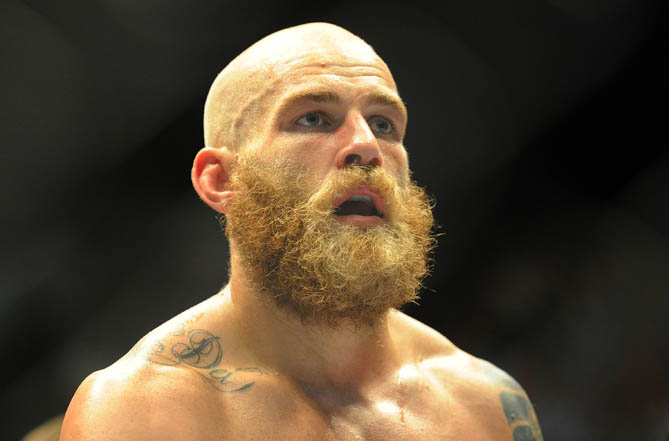 Heading into the bout between champion Jeremy “Pitbull” Smith and Garreth “Soldierboy” McLellan, above, there was an element of bad blood, which was to be expected in a rematch scenario, with the latter looking to reclaim a belt he once held.

McLellan had surrendered the title to Smith when they met at EFC12 and the return was always on the cards. This time around, McLellan exacted revenge and made sure that months of hard work paid off as he ended the bout in the first round.

The atmosphere at Carnival City was palpable as the fighters made their entrance to the hexagon and the fact that they weren’t afraid to trade blows in the early parts added to the excitement of the bout. A low blow from McLellan meant that there was a short pause in the action but once the fisticuffs resumed the pair continued to lay hurt on each other.

The fight swung in “Soldierboy’s” favour when they went to ground and from a top position he managed to land a massive elbow that left Smith’s nose bloodied before sinking a rear naked choke, forcing the “Pitbull” to tap out at 4:38 into the round.

“It feels fantastic. Jeremy’s a massively tough guy. He’s got a great skill set and we didn’t think we could submit or finish him. We wanted to take it the distance so we were super-fit but I didn’t think it would end this way,” said McLellan, who is now set to face No 1 contender JP Kruger.

In the co-main event, Demarte Pena extended the record for most title defences to five by dominating challenger Alain Ilunga over five rounds to take a comfortable unanimous points decision.

Pena did well to nullify Ilunga’s dangerous striking game and proved far too strong for him on the ground as the judges awarded two scores of 49-46 and a third of 50-46 which meant that Pena took his career record to 8-0.

In other bouts on the main card, Brendan Katz made a winning return to the hexagon by outpointing Gareth Buirski in their featherweight bout, while Ruan Potts made it an early night with a first-round submission, via triangle choke, of Ricky Misholas in their heavyweight bout.