In his third season in the PSL, Bonginkosi Ntuli has tipped this to be his year. 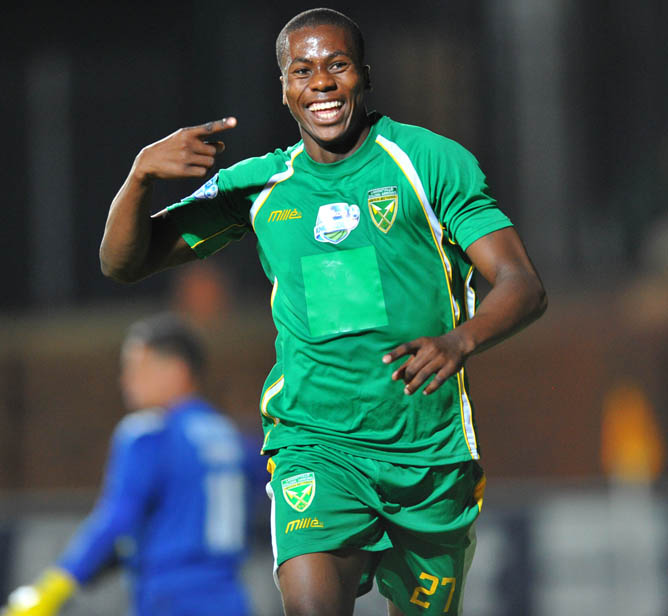 Bonginkosi Ntuli of Golden Arrows celebrates his goal during the 2013 Telkom Knockout football match between Bidvest Wits and Golden Arrows at Bidvest Stadium in Johannesburg on October 04, 2013©Samuel Shivambu/BackpagePix

He has shone with Golden Arrows, attracting the attention of big-spending Mamelodi Sundowns and Orlando Pirates.

Ntuli’s previous two seasons haven’t been much to write home about. He was promoted from Arrows’ development side to the senior team in the 2011/12 season, where his promotion depended on him passing matric.

He did that in 2012 and started the 2012/13 season with a bang, scoring and looking lively against defending champions Orlando Pirates in the first match. But his star dimmed, and he managed to score just seven goals.

“Injury affected me a lot last season which limited the matches I played,” Ntuli said. “I didn’t play more than 12 games which isn’t good for a player who is just finding his feet.

“But I have started this season well and the two goals I scored against Bidvest Wits have boosted my confidence.”

Those two goals contributed in Abafana Besthende’s advance to the quarterfinals of the Telkom Knockout where they face Pirates on Wednesday. But they weren’t enough to keep coach Manqoba Mngqithi who resigned a day after the win.

“I am still shocked by his decision,” Ntuli said. “No one in the club expected it.

“It hurt a lot, personally with the work he has done with my game and giving me the chance to make a name for myself.”

Mark Harrison instantly took over from Mngqithi, spending the international break getting to know his players. Harrison’s first test will come against Pirates, who will be returning from their Caf Champions League campaign in Tunisia against Esperance without Ntuli who is suspended.

Ntuli will get his first run under Harrison next Saturday when Arrows face Mpumalanga Black Aces.

“We have a good side, and the understanding and confidence which has been lacking is starting to come. I believe we will make the top eight,” Ntuli said.

“We can return this team to where it once was. It will need patience. Personally I will keeping working hard so I don’t only attract interest from big teams, but score regularly.”