It's often said in boxing that fighters face two battles when signing a contract. 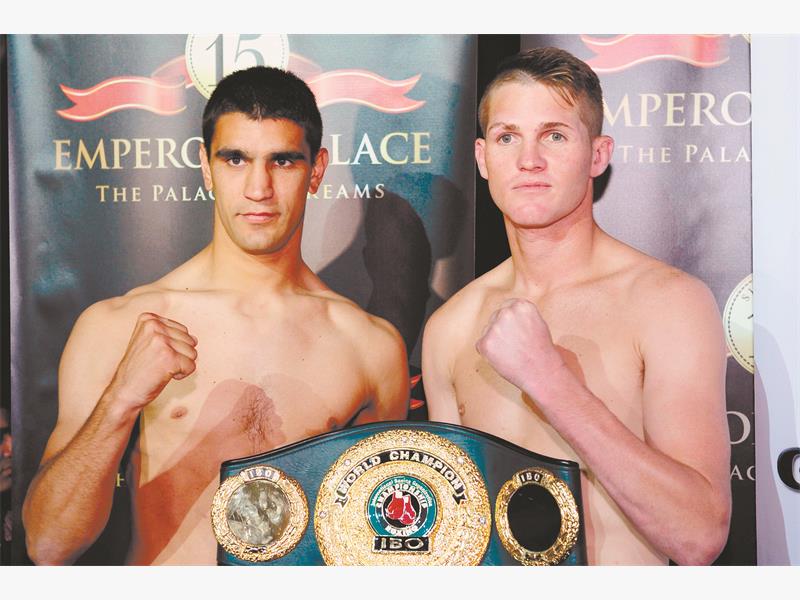 READY TO RUMBLE. Argentinian Ezequiel Maderna, left, and Tommy Oosthuizen during a Press conference this week ahead of their IBO super-middleweight title fight at Emperors Palace tonight. Picture: Neil McCartney

The first is in the form of the opponent they’re slated to face, the second is often the lonely one against the dreaded scale.

It was shown again yesterday as Tommy Oosthuizen missed the super-middleweight limit for the second time in his career when he weighed in for tonight’s IBO world title fight against Ezequiel Maderna at Emperors Palace.

Arriving at the venue an hour late, Oosthuizen looked as if he was gleaming with sweat when he stepped on the scale the first time only for the red digits to announce what several in attendance were thinking – he’d missed the mark.

Although it was a marginal miss, in the end it came down to a few grams, but it was a tell-tale sign that “Tommy Gun” might need to consider making the step up to light-heavyweight.

The basis of that decision will probably come tonight when he puts his unbeaten tag on the line against former Olympian Maderna and it would appear that the Argentinian visitor is capable of giving Oosthuizen a stern test.

Maderna has only lost once in his 21-fight career and that blot came against the highly regarded Edwin Rodriguez, who will challenge the division’s superstar Andre Ward for the WBA crown next weekend, which may well be a clear pointer to his quality.

Oosthuizen is also under pressure to perform after a lacklustre last outing. On that occasion he relied too much on power instead of using his greatest asset, speed, against Brandon Gonzalez back in June and was lucky to escape with a draw.

The “Fighting Force” bill will also see the return of IBO minimumweight champion Hekkie Budler when he defends his crown against another Argentine fighter, Hugo Verchelli. The diminutive Budler has the added motivation of the WBA interim strap in what will be his first fight since the impressive display against Nkosinathi Joyi in June.

On the undercard, promising junior-welterweight Adam de Moor gets a chance to impress on a big show when he takes on Nkosinathi Tshinave in an eight-ounder, Thembani Hobyane takes on Koos Sibiya in a junior-lightweight clash over 10, and junior-flyweight prospect Thabang Ramagole will meet Thabiso Moorosi over six rounds.