The spokesperson for Justice Minister Ronald Lamola, Chrispin Phiri, admitted there was a shortage of sanitisation products in some parts of the country. 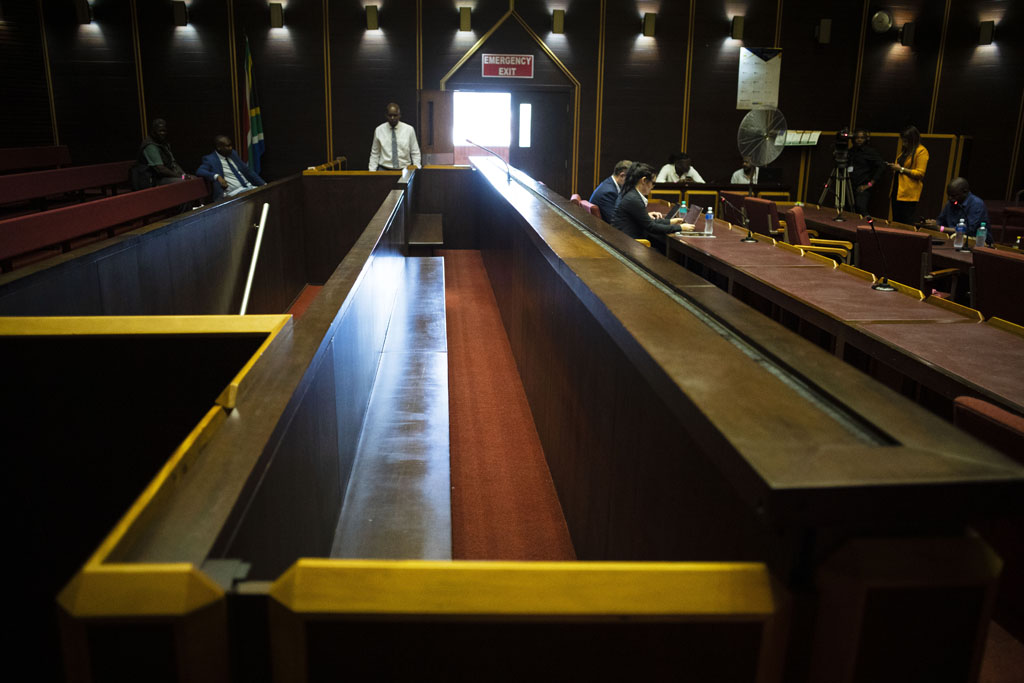 The court dock is empty, in the spot where former South African president Jacob Zuma should have appeared, at the Pietermaritzburg High Court in Pietermaritzburg, South Africa, 04 February 2020. Former President Zuma did not appear due to illness. Former president Zuma stands accused of taking kickbacks before he became president from a 51 billion rand (3.4 billion US dollar) purchase of fighter jets, patrol boats and military equipment manufactured by five European firms, including French defence company Thales. Picture: EPA-EFE/KIM LUDBROOK

The Law Society of SA (LSSA) has sounded the alarm over the slow pace of the promised sanitisation and deep-cleaning of overcrowded prisons, holding cells and courts amid the coronavirus outbreak.

“I’ve seen all these various directives from judge presidents and the chief justice, the only problem is that sanitising the courts isn’t happening,” said lawyer William Booth, who chairs the LSSA’s Criminal Law Working Group.

Booth claimed it was not being seen in police stations and police cells either.

“The police cells and prisons in the Western Cape and South Africa are filthy. So there’s no sanitation happening there.”

He believed inmates might apply for bail again to try and remove themselves from the conditions as prison medical facilities were not ideal if people fell ill. Booth added there have been instances where lawyers had contracted tuberculosis during prison visits in the past, which demonstrated the high-risk settings that inmates, prisons officials, the police and lawyers were exposed to.

The spokesperson for Justice Minister Ronald Lamola, Chrispin Phiri, admitted there was a shortage of sanitisation products in some parts of the country. He said the departments of Correctional Services, Justice and Treasury are in contact to solve the problem.

Police and Prisons Civil Rights Union (Popcru) spokesperson Richard Mamabolo said the union supported the government’s efforts to slow the spread of Covid-19, but was concerned its members were not getting enough support.

In the past, members got into trouble if they refused to drive overcrowded vehicles from prisons to court, and these concerns would be compounded in the light of the Covid-19 instructions, he added.

Mamabolo said although prison visits had been stopped, prisons should be urgently sanitised. The union is collating information from members around the country to find out which prisons are being deep-cleaned and sanitised, which ones have been given supplies and which have not.

He said police officers have been given some resources, like masks and gloves. Meanwhile, the Cape Town Bar Council limited the times to open its offices and library.

They will only be opened between 11:00 and 15:00 on Tuesdays and Thursdays. Librarians will limit users to only six at a time.