It was a similar picture in Pretoria, where residents were also preparing for the lockdown by stocking up on groceries. While the country prepares to go into lockdown for 21 days, shopping centres and cash and carry markets in Johannesburg were packed to capacity on Tuesday, with shoppers queuing from as early as 07.00am.

The sudden buying came just hours after President Cyril Ramaphosa on Monday announced a nationwide lockdown to contain the spread of Covid-19.

The president announced that the lockdown is set to begin on Thursday at 23.59pm and end on 16 April.

By Tuesday morning, the number of people who had tested positive for the virus had risen to 554.

Dozens of shoppers, some with masks and gloves, held onto their trolleys outside the Crown Mines Makro in Johannesburg on Tuesday morning. 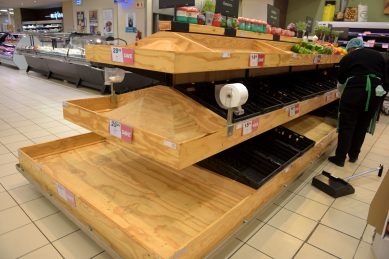 Empty shelves are pictured at a store in Johannesburg, 24 March 2020. Some people have stockpiling amid fears of shortages because of the Covid 19 virus pandemic. Picture: Tracy Lee Stark

With the queue growing longer and longer, some lost their patience and turned back. They said they feared that by the time they entered, the shop would be without sufficient stock.

Pensioner Jabu Malebogo told News24 that he had been up as early as 06.00am. He said he had opted to shop at Crown Mines Makro because it opened earlier than the one in Woodmead.

He said he did not want to take things lightly and had no choice but to stock up during this time of uncertainty in the country.

Malebogo, who filled up two trolleys with non-perishable goods, said he has the responsibility of feeding three families. He said he hoped the groceries he had bought to accommodate the three families would last at least the 21-day lockdown.

“I didn’t want to take things lightly, even though we heard last night from the President [Cyril Ramaphosa] assuring us and saying we shouldn’t panic because grocery stores will be open during the lockdown, but you can’t be sure,” the pensioner said.

He added that not everyone has the money to stock up and that he was worried about the elderly. Malebogo said it would have been better if the elderly received their social grants much earlier so they could buy all the essentials well in time and be able to stay at home during the lockdown.

“However, the assurance is there and I trust we won’t have problems with food,” he added.

Many patrons at the shop said they were concerned about the virus, which originated in Wuhan, China in December 2019 and has since spread to most other countries.

“I am concerned about this virus because it caught us off guard, I could say,” Malebogo added.

Verculine Rubben, who had also been queuing at Crown Mines Makro since the early hours, said she was anxious about the virus and the future of the country.

She added they understood that government had urged people not to panic, but said it was difficult not to.

It was a similar picture in Pretoria, where residents were also preparing for the lockdown by stocking up on groceries.

News24 visited the Makro in Pretoria East on Tuesday morning, where shoppers who did not want to be named, said they weren’t panic buying, but rather doing their monthly shopping early as they prepare for the lockdown.

“We are keeping to the safety precaution of the lockdown, to stay at our house. Our family discussed that we will not go into the whole panic buying thing, we just bought the groceries for the month,” one person told News24. Spacing restrictions at till points for social distancing are pictured at a store in Johannesburg, 24 March 2020. Some people have started stockpiling amid fears of shortages because of the Covid 19 virus pandemic. Picture: Tracy Lee Stark

The shopper said she wasn’t worried about a food shortage but did worry that certain food items would be in short supply during the lockdown.

Another shopper said he decided to get the essentials early, as month-end is around the corner, which may be more chaotic given that the lockdown will commence at midnight on Thursday.

He said he was not worried about food shortages or accessing food during the lockdown, but wanted to heed Ramaphosa’s call to stay indoors and limit contact with other people as much as possible.

The Makro in Pretoria East had implemented precautions to enable social distancing, including limiting the number of people allowed in the store at any given time.

News24 also visited several other shops in Pretoria which all seemed busier than usual, but had no long queues.