The black men and women are seen in the video being taught by a white woman on how to wash their hands as a measure to protect themselves against the virus. 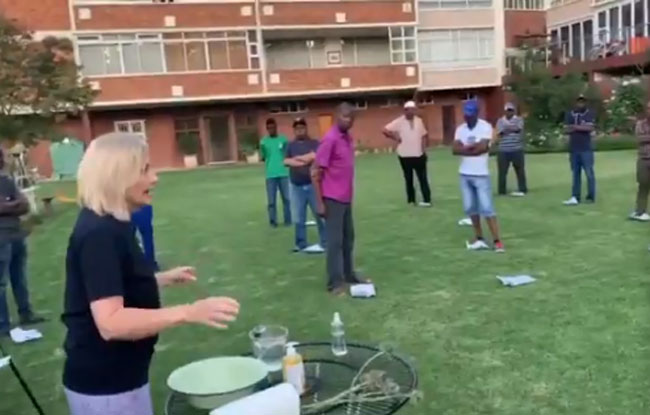 Video footage was posted on Twitter showing a group of black “workers” being taught how to be hygienic during the Covid-19 pandemic.

The user who posted the video said the incident occurred at a building located in Illovo, Sandton.

The men and women seen in the video being taught by a white woman on how to wash their hands as a measure to protect themselves against the virus.

Jones said the decision to launch the investigation comes after a number of complaints were received by the commission.

Mmatepa Segooa, 28, said she lodged a complaint to the SAHRC as she knew one of the domestic workers in the video.

Segooa said the woman’s actions were inappropriate as she could have taught them before the lockdown and questioned why the woman addressed the workers as boys and girls while they were adults.

“In Illovo, the workers who live on the 5th floor were commanded to come be taught how to be hygienic. This was in full display of all residents of the block who were invited to watch from their balconies.” pic.twitter.com/CAZLkufyTR

The condescending manner in which our “mothers and fathers” continue to be addressed, is really upsetting!! ???????? #StayAtHomeSa pic.twitter.com/Q1kaeIplUQ

This crisis is really exposing who some people are. Selfish, entitled, racist, condescending, utterly brainless. In what universe does the black woman who daily cleans the home that you have made dirty, need *your* instruction on hygiene or cleanliness? https://t.co/OwUP3oJ1vk

Oh how long? Will it carry on for that the dignity of others is so undermined