Ghebreyesus says it is appalling to find scientists who still make 'racist remarks' that seek to treat some people as guinea pigs. 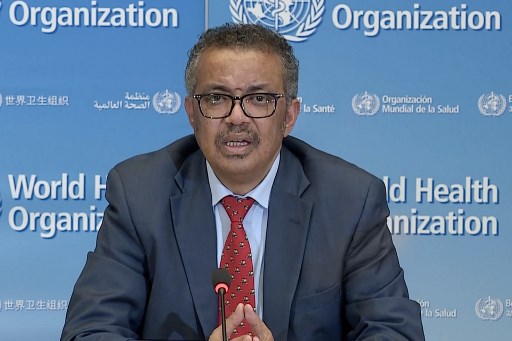 A TV grab taken from a video released by the World Health Organization (WHO) shows WHO Chief Tedros Adhanom Ghebreyesus attending a virtual news briefing on COVID-19 (novel coronavirus) from the WHO headquarters in Geneva on April 6, 2020. AFP

Head of resuscitation department at Cochin Hospital Jean Paul Mira and research director at Inserm Dr Camille Locht were slammed after suggesting that a drug test be done in Africa, a continent that had reported just over 10,000 Covid-19 cases on Tuesday.

They said during a TV interview: “If I can be provocative, shouldn’t we be doing this study in Africa, where there are no masks, no treatments, no resuscitation?”

“A bit like as it is done elsewhere for some studies on Aids. In prostitutes, we try things because we know that they are highly exposed and that they do not protect themselves.”

During a virtual news briefing on Covid-19 from the WHO headquarters in Geneva on Monday, Ghebreyesus hammered the two and said it was a disgrace to find scientists making such statements in 2020.

“To be honest I was so appalled. It was a time when I said ‘when we needed solidarity that these kind of racist remarks will not help’. It goes against the solidarity. The hangover from colonial mentality has to stop. Africa cannot and will not be a testing ground for any vaccine.

“It was a disgrace, actually appalling to hear during the 21st century from scientists, that kind of remark. We condemn these with the strongest terms possible. We assure you that this will not happen in Africa or elsewhere,” he said.

Should there be any vaccine test, it will be done all over the world using the same protocol and rules, he added, and anything that sought to deviate from the rules would not be allowed.

“Whether it’s in Europe, Africa or wherever, we will use the same protocol and, if there is a need, to test or treat any human being the same, equally. WHO will not allow this to happen. Proper protocol will be followed and human beings will be treated as human beings.”

Bravo to the @WHO Director General @DrTedros for firmly dismissing the racists who wanted to use only Africa as testing grounds for vaccines. They should be developed and tested in all parts of the world consistent with sound medical protocol and systems. #NoToColonialHangover! pic.twitter.com/2qY2ij0Mgn