Some of South Africa's leaders have reiterated the call to use the time as a day of reflection during the global pandemic. 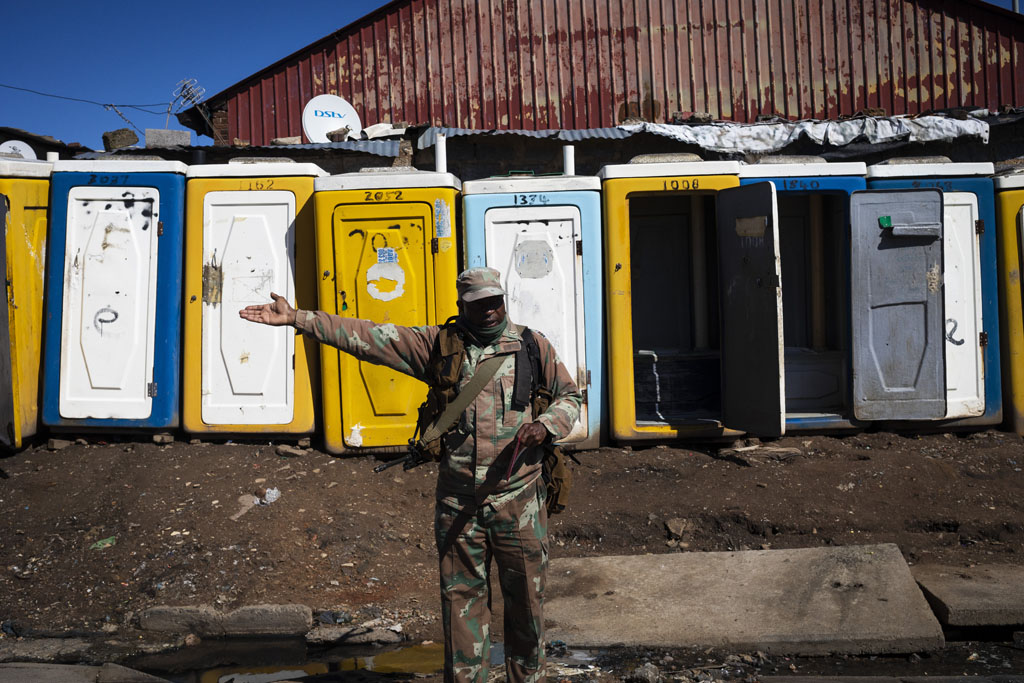 Members of the SAPS (South African Police Services) and SANDF (South African National Defense Forces) hand out pamphlets informing township residents about COVID-19 during a national lockdown following President Cyril Ramaphosa's declaration of a National Disaster as a result of the COVID-19 pandemic, in downtown Johannesburg, South Africa, 15 April 2020. The national lockdown declared by Ramaphosa on 23 March 2020 has been extended by 14 days and is due to finish 30 April 2020. Picture: EPA-EFE/KIM LUDBROOK

It will be celebrated on Monday under a strict nationwide lockdown that limits many freedoms in a bid to curb the spread of the devastating novel coronavirus (Covid-19).

Some of South Africa’s leaders have reiterated the call to use the time as a day of reflection during the global pandemic.

As the country awaits President Cyril Ramaphosa’s address on Monday, the government said in a statement that the theme of this year’s Freedom Day would be “Solidarity and the triumph of the human spirit in challenging times”.

South Africans should take the time to “ponder on the progress we have made as a country” and how we will move forward from here, it said.

“South Africans are reminded that the values as espoused in the Freedom Charter still hold true even under these trying times and they are an overall vision for a non-racial and democratic society and many of its values are embedded in the Constitution.”

Justice Minister Ronald Lamola reiterated this message, saying while South Africans are not free at this time, they could determine a future in which they are.

“Freedom Day 2020 is unique; it is happening under the imposing limitations of a dictatorial virus which has imposed restrictions on people across the globe. It is difficult to speak about freedom when people are not free.

“It is clear that our freedom will come from our actions as a nation and how we respond to the advice of the World Health Organisation (WHO), government and medical scientists.

“We can determine and shape a kind of future that we want in our country by adhering to the restrictions and encouraging our communities to do the same. In that way, the world will be free again,” Lamola said.

Presiding officers of Parliament said the restrictions applied on people’s movement “are in no way equivalent to the inhumane limitations forced upon the majority of this country by the apartheid government”.

They added that it is in place for the good of the people and “is justifiable to stop the spread of a deadly virus”.

“Despite restrictions, we celebrate this year’s Freedom Day (on 27 April) with comforting guarantees that the government is seized with putting in place measures that will help ensure that all people of this country have an equal chance of survival – during and beyond this pandemic,” it said.

DA leader John Steenhuisen said on Monday via video that the coronavirus lockdown has given South Africans an opportunity to reflect on how important freedoms are.

“In this time, when many of our freedoms have been limited to stop the spread of the virus, we must now acknowledge that these are freedoms that we must never, ever take for granted.”

He said it was important that South Africans not allow the infringement of freedoms by powers given to individuals during the emergency period.

“We must never allow the temporary to become the permanent, whether it’s the use of armed forces, whether it’s restrictions on movement… we need to acknowledge that these are temporary measures.”

South Africans should never go back to a situation where these freedoms acknowledged in the Bill of Rights are infringed upon or impeded, he added.

On the eve of its 25th anniversary, the South African Human Rights Commission (SAHRC) said the “irony” of celebrating Freedom Day during the national state of disaster is not lost on the commission.

It said despite being in the middle of a global pandemic, South Africans could still reflect on the basic rights that were ushered in on this day in 1994.

“The current limitations on rights such as freedom of movement, freedom of association and other rights imposed in terms of the disaster management regulations to curb the spread of the rapidly spreading deadly Covid-19 virus should remind us all, on this Freedom Day, that our human rights and freedoms should never be taken for granted but must be treasured and jealously safeguarded.”

The Inkatha Freedom Party (IFP) said all South Africans must pay tribute to those who sought to fight and win the freedoms South Africa enjoys today, and who are no longer alive.

“Freedom can only be thoroughly enjoyed and appreciated when social and economic justice, becomes the new struggle this generation fights for in post-apartheid, post-liberated, South Africa,” it said in a statement.

The party believed political freedom must now also be met with a fight for social and economic justice.

At least 243.5 million cases of Covid-19 registered worldwide
4 hours ago
4 hours ago

At least 243.5 million cases of Covid-19 registered worldwide
4 hours ago
4 hours ago