'After this morning's exercise period, complaints have been received by the authorities,' a statement released on Sea Point CID's official Facebook page said. 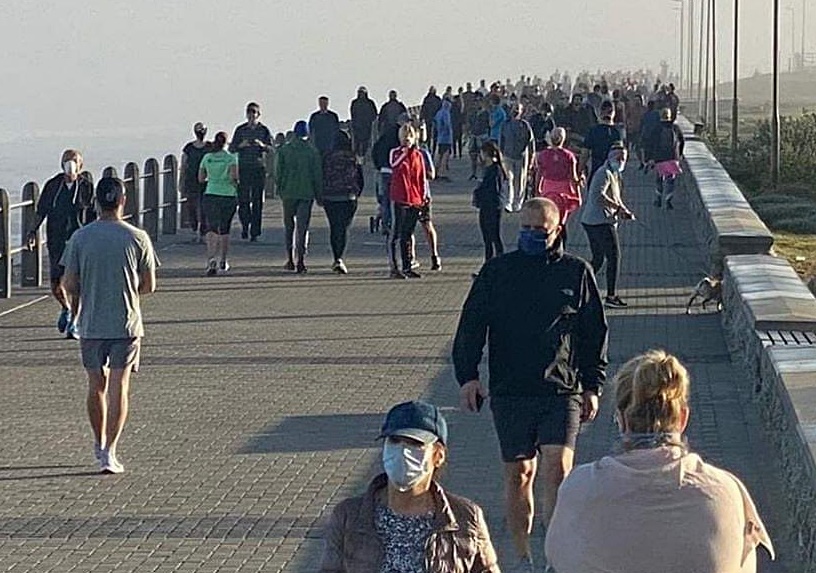 The Sea Point City Improvement District has issued a warning to joggers on the Sea Point promenade that authorities will start clamping down on people not following lockdown exercising regulations from Saturday, following a raft of complaints.

Many residents took to the popular promenade en masse on Friday between the hours of 06.00am and 09.00am, as stipulated by the new rules under lockdown level 4.

However, the sight of large groups passing each other on the paving sparked outcry and concern in many sectors, with the Sea Point CID and local ward councillor Nicola Jowell confirming receiving complaints from the public.

“After this morning’s exercise period, complaints have been received by the authorities,” a statement released on Sea Point CID’s official Facebook page said.

“The SAPS have issued a warning to all residents that from tomorrow, Saturday May 2, 2020, there will be a zero-tolerance approach.”

According to the advisory:

“Please obey the above, as all authorities have been instructed to do the necessary in terms,” the advisory said.

‘No driving. Your 5km starts at your door’

Ward councillor Nicola Jowell told News24 the Sea Point promenade was one of many places that were very crowded on Friday.

Many of those exercising were following the protocols, but there were some who did not.

From Saturday, the focus will be ensuring that nobody is driving to the promenade.

“Your 5km starts at your door,” Jowell stressed.

She also stressed that they would be clamping down on anyone standing around and socialising.

The operation will be driven by the police and they would look out for physical distancing breaches too, she said.

According to the new regulations, citizens can exercise between the hours of 06.00am and 09.00am, but only within a 5km radius of their home, and not in groups.

On Thursday evening, the City of Cape Town released which public areas it would be opening for exercise, in line with the new rules.

Mayor Dan Plato confirmed that parks, beaches and reserves would remain closed, but certain public boardwalks and pathways would be open, which included the Sea Point promenade, Strand promenade, and others.

“I am calling on residents to please continue to practice physical distancing when they are out exercising. Wear a face mask, or a cloth to cover your mouth and nose when you leave home. Do not congregate or exercise in groups. This is for your own safety, and for the safety of others,” Plato said.