It is not yet clear precisely when SAPS in Muizenberg became aware of the positive Covid-19 case they have been exposed to. 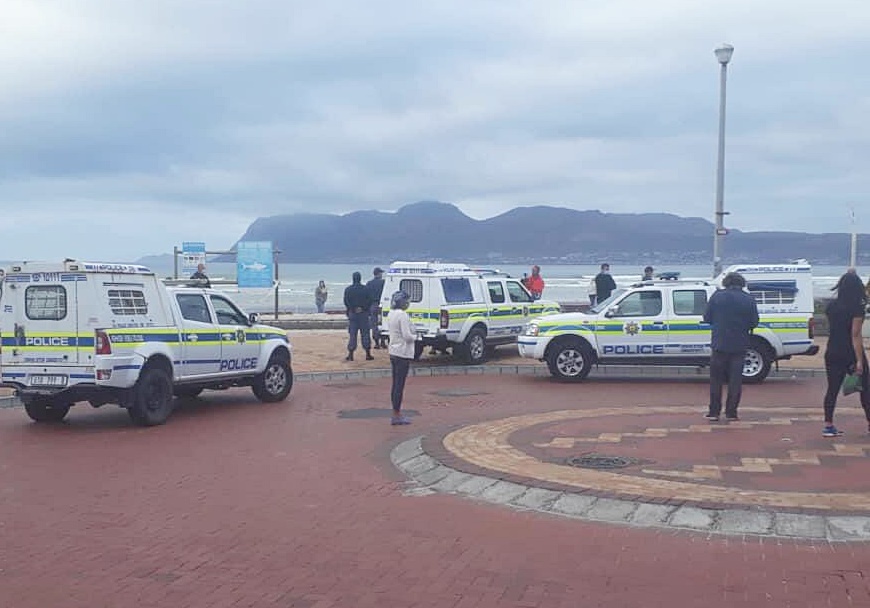 Police gather at Surfer's Corner, Muizenberg, where people were arrested for staging a silent protest against regulations prohibiting surfing, 5 May 2020. Picture: Twitter / @kanniekaknie

The police station where a Cape Town mother and father, and several “ocean protesters”, were arrested and charged this week has been closed due to a staff member testing positive for Covid-19.

Liam Bulgen and his fiance Tereza Cervinkova were arrested on Monday 4 May at Muizenberg beach, after their 21-month-old daughter ran onto the sand.

On Tuesday, several more people were arrested for “standing still” during the 6am to 9am exercise window, while protesting for the right to surf and swim, as their exercise of choice. Swimming and surfing are currently not allowed under level 4.

Bulgen protested against the arrest of himself and his fiance, and expressed dismay that the arresting officers and SAPS staff who transported and charged them had not worn masks and other protective gear.

It is not yet clear precisely when SAPS in Muizenberg became aware of the positive Covid-19 case they have been exposed to nor what steps the police station management took, and when, to protect the public they dealt with.

“Police members who came in contact with the infected case will undergo the necessary screening/testing and quarantined.” Potelwa said the SAPS staff in question had been sent home on Thursday.

“Operations from the station building are expected to resume on Monday morning once the decontamination process is completed,” Potelwa added.

“Operations of the community service centre have been relocated to a mobile unit currently placed outside the front gate of the station. The decontamination process is undertaken in line with Covid-19 protocols (48 hours). Service delivery will not be hampered as both visible policing and detectives will continue to operate uninterrupted by the developments.”

On Wednesday, the head of police in the Western Cape admitted SAPS had been “overzealous” in the couple’s arrest.

Provincial police commissioner Lieutenant General Yolisa Matakata also said police officials may not have used “logic or common sense” when they made the arrest.

Further, the general said it was not acceptable that arrests had been made, and people transported by police officials not wearing proper PPE (personal protective equipment, such as masks and gloves). The general had been reporting to a Western Cape Provincial Legislature ad-hoc committee on the Covid-19 crisis.