82 people have died of coronavirus in the Eastern Cape

A total of 82 people have died of the coronavirus in the Eastern Cape since the start of the outbreak. 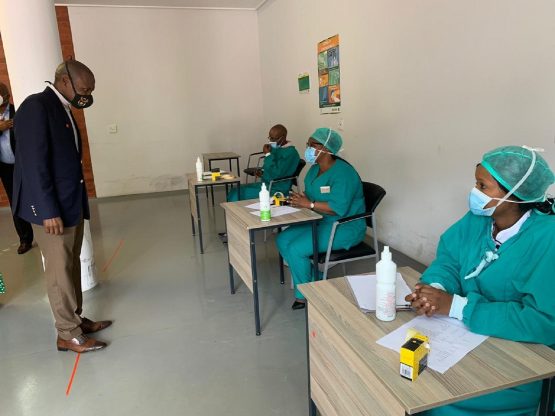 Health Minister Zweli Mkhize visiting the Cecilia Makiwane Hospital in East London on Tuesday as part of a Covid-19 tour of the Eastern Cape. Image: Supplied

This is according to a performance report submitted by its health department and presented to the province’s Provincial Coronavirus Command Council on Monday.

The province currently has the third highest number of infections – 4 111, or 12% of the national total. The Western Cape has the most confirmed cases at 22 567 followed by Gauteng with 4 231.

According to the statistics presented to the council, headed by Eastern Cape Premier Lubabalo Mabuyane, 1 613 817 people were screened for coronavirus, of which 56 628 people were tested.

Mabuyane’s office in a statement said while 2 123 people have recovered, 82 fatalities have been reported – 29 in Nelson Mandela Bay Metro, 18 in OR Tambo District, 14 in Chris Hani District, 12 in Buffalo City Metro, four in Amathole District, four in Sarah Baartman and one person in Joe Gqabi District municipality.

It estimated that about 80% of the Eastern Cape population may contract the virus with mild symptoms or be asymptomatic, 15% of the population might require hospitalisation, 5% might be in need of high care, while 1% to 3% may die of the virus.

Meanwhile, 191 healthcare workers from both the public and private sector have tested positive for the virus, the council heard.

Most were in the Nelson Mandela Bay and Buffulo City metros.