This is a war – no more excuses, Ramaphosa tells WC government

The war on Covid-19 is one we must win, the president said, and he expects the Western Cape to ramp up the fight by providing more beds and ensuring adequate staffing numbers. 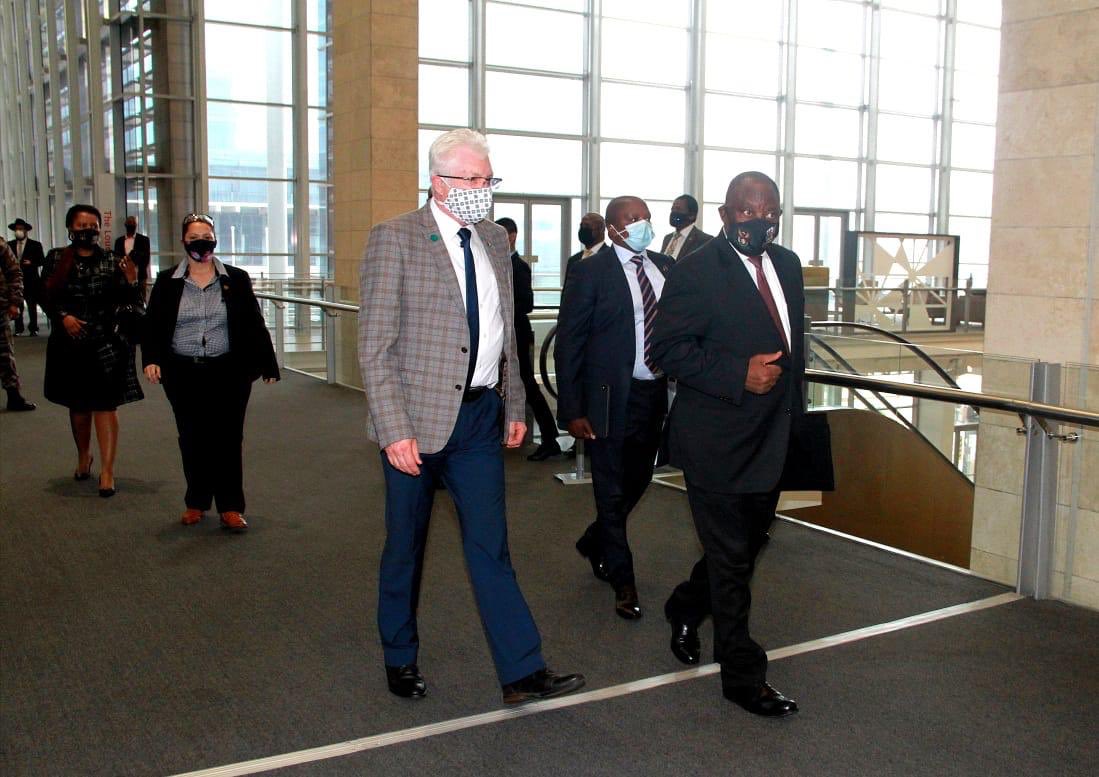 President Cyril Ramaphosa has made it clear that the Western Cape needs to ramp up their Covid-19 response, saying no excuse will be accepted in the war on the disease.

Ramaphosa was joined by Health Minister Dr Zweli Mkhize and Western Cape Premier Alan Winde as the president assessed the province, which has by far the country’s greatest infection rates, response to the Covid-19 pandemic on Friday.

The president said the province’s high infection rate has been a matter of deep concern and though was happy with the presentation that was given by the Western Cape government on their Covid-19 response, more needed to be done in terms of provision of beds and ensuring adequate staff numbers.

“We need to pull up our socks and provide more beds, it is better to over provide than under provide,” he said.

He praised the leadership of the province’s premier, Alan Winde.

“I am also pleased with a provincial level the government has been meeting with national quite often and they have demonstrated a dynamic link.

“Premier Winde I am also pleased with your leadership and that we work pretty well together. You have been the leading province with the district model, a much more effective level of containing Covid-19.”

Ramaphosa said the country was engaged in a must-win war with the virus, and he wanted contact-tracing to improve to help flatten the curve.

“Tracing of contacts especially health workers who have tested positive for the virus have to be tracked down. Not having enough staff members is an excuse I will not accept, we need to find more health care workers.”

The president said they must over-provide the number of beds and the current beds the provinces offer was not enough.

Ramaphosa was given a detailed Covid-19 strategy from the province’s health department head Dr Keith Cloete.

He said the Western Cape has a four-part strategy, the first part is health system preparedness, then identifying hotspots, containing and mitigating by moving into communities to establish transmission, and lastly focusing and protecting the most vulnerable, those at high risk and have comorbidities or underlying conditions.

How this will be implemented:

Currently the province has six quarantine facilities, with a capacity of 1,262 beds, Cloete said this would be accelerated in the next two days with 42 new facilities brought online, and assigned to specific sub-districts.

More testing will be done for people in hospitals, health care workers, and those who are at high risk.

Cloete said their main concern at the moment is people over the age of 55 with comorbidities, particularly those with diabetes and hypertension. They had found that people with HIV did not have a higher risk of dying from the virus.

“We found that people over the age of 55 with comorbidities needed to be hospitalised, they are the high-risk category. Of that category, 30% of the deaths had diabetes and 70% with hypertension, who were over the age of 70.”

Premier Winde expressed his desire for the health minister to visit the province more often to assist them to get through the pandemic. The province currently has 27,006 confirmed cases, with 651 deaths and is the country’s epicentre.

Winde said they expect 100,000 infection rate within the next few weeks.

#COVID19 | President @CyrilRamaphosa arrives at the @CTICC_Official where he is received by Western Cape Premier @AlanWinde. The President is spending the day in the Western Cape, where he will be assessing the provincial response to the COVID-19 pandemic. pic.twitter.com/WedIsCitYQ

During the presentation, they also raised their concerns with the lack of beds they currently have but said they have measures in place to address the problem. .

Critical care beds for severe cases of the coronavirus, the existing capacity within the public sector is 135 beds, Cloete said they will need additional resources to have 100 more critical care beds.

The public sector will be purchasing 300 critical care beds from the private sector and with 795 palliative care beds are planned.

Acute and critical beds the province currently has a total of 6,304 beds, Cloete said from their models they will need 1,496 more beds, with the current shortfall at 1,750 beds.

Western Cape government says they have shifted their model for low-risk people to self-care, those who have a milder form of the virus to stay home, isolate, and quarantine based on the protection of vulnerable people in the addition to curbing the transmission.

Mkhize said he mostly agreed with the presentation from the provincial government and said they would be assisting the province with additional capacity of beds.

“With not only dealing with positive cases but also the number of contacts. Fortunately, there had been a good testing rate in the identified hotspots,” said Mkhize.