Cabinet is unwavering in its commitment to fully implement a range of interventions developed from the national strategic plan on GBV and femicide. President Cyril Ramaphosa during the swearing in of the new Presidential Cabinet at the Presidential Guesthouse in Pretoria, 30 May 2019. Picture: Jacques Nelles

The Ministry in the Presidency says Cabinet raised it concerns about the spike in gender-based violence (GBV) cases across the country following the recent spate of murders of women and children.

In a statement on Friday, the members of the Cabinet called on South Africans to unite and work together to stop GBV.

“Cabinet commends law-enforcement agencies for their swift action in arresting some of the suspects and has urged the agencies to continue working tirelessly to arrest all those involved in these gruesome murders.

“Cabinet is unwavering in its commitment to fully implement a range of interventions developed from the national strategic plan on GBV and femicide,” said the ministry.

The ministry said the Inter-Ministerial Committee (IMC) chaired by the minister in the presidency for women, youth and persons with disabilities, Maite Nkoana-Mashabane, is working on driving the multidisciplinary government interventions.

“However, the most effective intervention requires all South Africans to play their part in ending the culture of violence against the most vulnerable members of society,” it added.

During a virtual sitting of the National Assembly on Thursday, Deputy President David Mabuza addressed the matter of gender-based violence saying South African men needed to “find themselves” to advance a moral regeneration.

“Then, we can serve as positive role models to future generations. We can mentor the boy child and inspire confidence in them to love women and treat their bodies with respect.

“It is the duty of the state to arrest, prosecute and remove perpetrators from society. This is an undertaking we will not take lightly. We will work to serve and protect women. This we will do with courage, conviction and determination. Justice will be done and must be seen to be done,” Mabuza said.

“As part of responding to the enhanced risk-adjusted Level 3 of the national lockdown, amendments to the regulations in terms of the Disaster Management Act, 2002 (Act 57 of 2002) were presented. Whilst Cabinet appreciated the extensive work still being done to maintain a balance between sustaining livelihoods and saving lives, it approved the gazetting of the amendments relating to the opening of restaurants, hotels and casinos.

“Cabinet reiterates the call to all of us to work together to stop the spread of infections within our communities by observing the health protocols such as regularly washing hands, social distancing and wearing a mask when in public.”

“This was necessitated by the Covid-19 pandemic and the resultant economic downturn. The supplementary budget sets out a road-map to stabilise debt by improving our spending patterns and creating a foundation for economic revival.

“Cabinet is optimistic that the commitments announced by Minister Mboweni will put our economy firmly on a solid and sustainable path, particularly if everyone joins government in implementing them,” the ministry said.

READ NEXT: Covid-19: Government says it won’t track your phone without permission 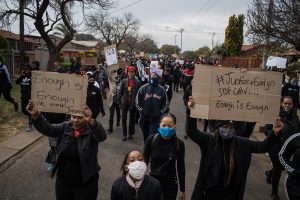 PICS: Eersterust residents take to the streets after local woman's murder
1 year ago
1 year ago

Disabled Alliance slams dept, Nkoana-Mashabane as ‘out of touch’
2 years ago
2 years ago

PICS: Eersterust residents take to the streets after local woman's murder
1 year ago
1 year ago

Disabled Alliance slams dept, Nkoana-Mashabane as ‘out of touch’
2 years ago
2 years ago