EFF on Oxford-AstraZeneca Covid-19 vaccine: We warned you 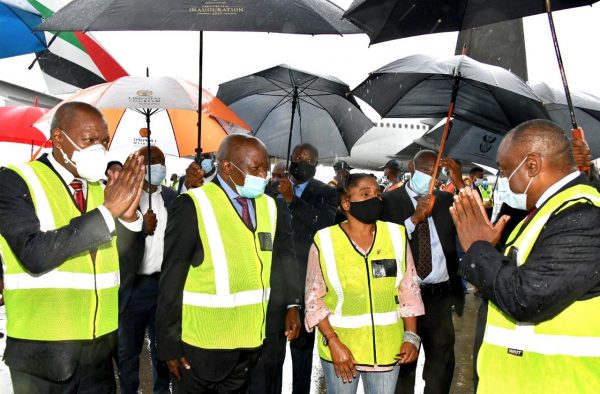 South Africa received its first batch of one million doses of the Covid-19 vaccine from India on 1 February 2021. Picture: GCIS

Mkhize announced the pausing of the rollout of the Oxford-AstraZeneca vaccine following a clinical trial showing the doses were ineffective on about 2000 patients infected with the newer strain of Covid-19.

The EFF said it warned government about this, but was never taken seriously.

I see a lot of people are upset about the April expiry date of the #AstraZeneca vaccines.

But let’s get real – if we cannot administer 1 million doses between now and April, the expiry date is the least of our worries.

“When the new variant was reported in mid-December, the EFF raised concerns over the efficacy of Oxford-AstraZeneca vaccines on it. However, true to this administration’s incompetence, our concerns were never taken seriously.

It has called for the immediate consolidation and further research on the efficacy of vaccines on the South African strain 501.V2/B.1.351 by all manufacturers that government had entered into agreements with.

“There must be accountability given to our people on why a vaccine expiring before our phase one rollout strategy was procured for twice than it was sold in European countries.

“As a country we must be embarrassed by the PR exercise that took place at OR Tambo on 1 February by President Cyril Ramaphosa and his ministers welcoming a vaccine with no efficacy for our context. They must be ashamed for dangerously embarrassing South Africa,” said the party.

Mkhize’s announcement has been met with disappointment and anger among South Africans, who have also accused the government of incompetence.

Today I wish I can criticise DOH like a politician.

Some of my faves are saying: ‘You knew of the variant in Dec 2020 and went ahead and ordered AdtraZeneca’

What should they have done? Waited until Dec 2021 to get a vaccine that would have been tested against this strain? pic.twitter.com/ErvnmSijBG

Some have, however, defended government, saying it is fighting against a moving target, and could not have known that the vaccine would be inefficient.