2 260 healthcare workers have had Johnson & Johnson jab so far

At least 40 000 health workers have contracted the virus. More than 600 have died. 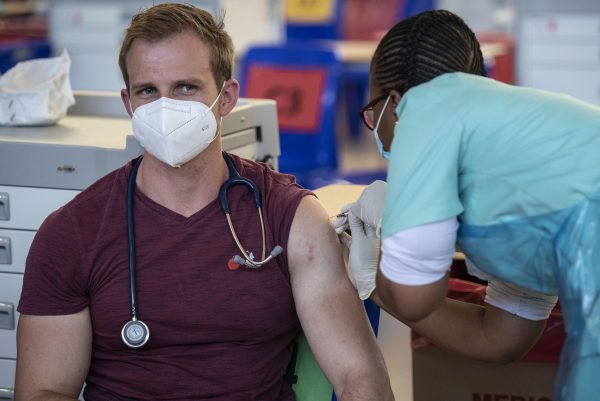 Healthcare workers are given the jab of the first batch of Johnson & Johnson vaccines at Chris Hani Baragwanath Hospital in Soweto on 17 February 2021, in the fight against the coronavirus pandemic. Picture: Michel Bega

A total of 2 260 healthcare workers received the Johnson & Johnson vaccination by Thursday night, according to the Ministry of Health.

The single-dose vaccine being used in the Sisonke (Together) protocol will be given to up to 500 000 healthcare workers, starting in 18 public sector hospitals across all nine provinces.

The ministry said Phase 1 of the vaccine programme was focused on health workers because they were three to four times more likely to contract Covid-19 compared to the general population.

At least 40 000 health workers have contracted the virus. More than 600 have died.

Phase 1 of the vaccination strategy was paused temporarily earlier in February, following concerns over the efficacy of the Oxford-AstraZeneca vaccine (also known as Covishield) against mild to moderate Covid-19 caused by the 501.V2 variant of the virus.

The health department decided that more research was needed for that vaccine.

South Africa switched to the Johnson & Johnson vaccine instead, given the urgent need to have a vaccine in place before the expected third wave of infections.

The SA Medical Research Council said the safety of the vaccine was assessed in the international Phase 3 study, “ENSEMBLE”, conducted across Latin America, USA and South Africa with more than 43 000 participants.

South Africa contributed around 7 000 participants to the trial between October 2020 and February 2021, including participants who were exposed to the 501.V2 variant.

“The long-term follow-up of study participants is still ongoing, as is required for the process of regulatory approval by the South African Health Products Regulatory Authority (Sahpra) for commercial or emergency use,” the SAMRC said.

It added that, since safety and efficacy had already been proven, it was being given to healthcare workers to assess the “real world effectiveness”.

President Cyril Ramaphosa was among the first to receive this vaccine.

WATCH: ‘I really did not feel much pain’ – Squirmish Ramaphosa gets vaccinated for Covid-19

The programme is hoped to help mitigate the spread and severity of the virus, which was linked to another 230 deaths, according to the health ministry’s report on Thursday.

The number of new cases reported was 2 327 on Thursday.