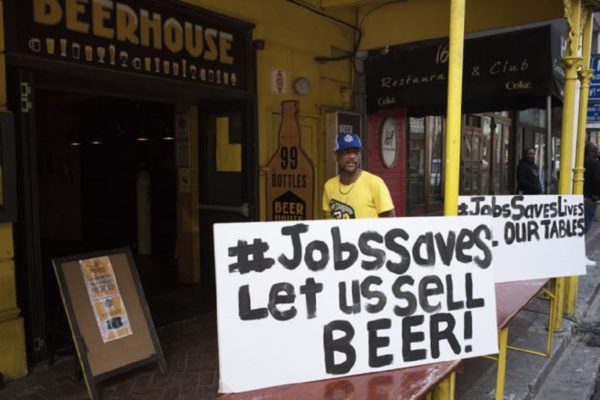 Liquor traders are urging the government not to impose a fourth ban on alcohol sales to help minimise the risk of a third wave of Covid-19 infections after the Easter period.

Industry stakeholders on Friday said they could not afford any further restrictions by the National Coronavirus Command Council (NCCC), which met on Thursday to consider proposals by the Ministerial Advisory Committee (MAC).

The MAC has reportedly advised the NCCC to move the country to Alert Level 2 lockdown ahead of the Easter break.

It has recommended the government restrict gatherings to 50 people, impose a 10pm national curfew and limit the sale of alcohol from Monday to Thursday from 10am to 6pm. This has seen some South Africans stock up on booze ahead of the Easter holidays in anticipation of a possible ban.

The NCCC last imposed a five-week ban on booze sales between 29 December 2020 and 2 February 2021 when South Africa was in the grip of the second wave in Covid infections.

The convener of the Liquor Traders Formation, Lucky Ntimane, told The Citizen there was no need for the government to reimpose another ban because there was no scientific data to justify such an action due to the decrease in infections in recent weeks.

“There is no reason for the government to institute another ban. If anything the government should be complimenting the liquor industry and liquor traders for having fully complied with Covid-19 regulations and continuing to support the government’s efforts in stemming the tide of the Covid-19 infections,” Ntimane said.

He said reintroducing a total ban on alcohol sales would decimate an already struggling tavern industry.

“The tavern sector cannot afford another ban and a pronouncement to the effect would be a declaration by the president to officially destroy the lives and livelihoods of the black businesses earning their honest living through the trade of alcohol.”

According to research conducted by the SA Liquor Brandowners Association (SALBA) in 2020 and earlier this year, the cumulative impact of the three alcohol bans saw sales revenue decline by R36.3 billion. Tax revenue loss (excluding excise) to the fiscus from the value chain arising from the bans amounted to R29.3 billion.

The alcohol industry made recommendations to the government, through the National Economic Development and Labour Council (Nedlac), on alternative measures to deal with Covid-19 infections during the Easter break.

The industry, which includes the National Liquor Traders Council, SALBA and the Beer Association of SA, recommended that alcohol sales should continue under normal pre-lockdown hours, with restrictions only introduced if hospital capacity becomes severely strained.

They also urged yhe government not to prohibit interprovincial travel, but reintroduce a national curfew from 11pm to 4am, limit gatherings to 50% of capacity and a maximum of 50 people indoors to 100 people outdoors.

Acting Minister in the Presidency Khumbudzo Ntshavheni on Thursday declined to comment on the deliberations of the NCCC. She confirmed the plans would look at managing the Easter period, Jewish Passover – also known as Pesach – and Ramadan that will follow thereafter.

“I can’t pre-empt those advices and the decision of the NCCC. When the time is right, we all know as South Africans that the president will convene a ‘family meeting’ and communicate those decisions,” Ntshavheni said.

But with the liquor industry trying to recover from the previous bans in 2020, Ntimane said the industry had put measures in place to reduce the spread of Covid-19 through the Distell sponsored Covid-19 awareness campaign.

“We have already demonstrated through various initiatives on the ground the role we as liquor traders can play in minimising the risk of transmission in our environment by encouraging our patrons to observe Covid-19 regulations at all times and through Distell funded tavern compliance focus groups,” Ntimane said.