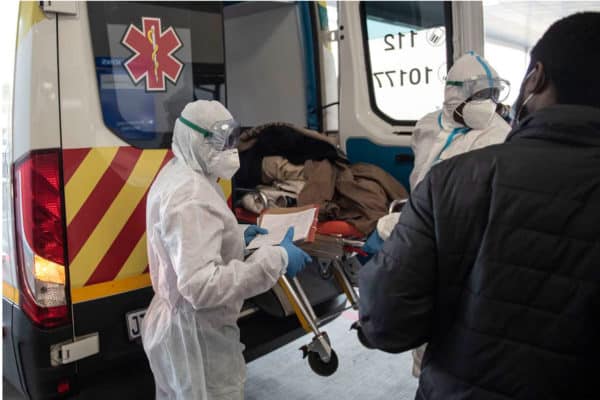 Medics use a stretcher to remove a Covid-19 patient from an ambulance, 21 June 2021, as they admit the patient to the Chris Hani Baragwanath Covid-19 facility in Soweto. Picture: Citizen.co.za/Michel Bega

If you’re still hitting the pub for a few beers with your friends after work, you may want to get your head out of the sand and start paying attention to the devastation around you.

Covid-19 is not a conspiracy theory that was cooked up by big pharmaceutical companies and politicians, it’s real and it’s infecting and killing South Africans at an alarming rate.

This advice is mild compared to the bombshells dropped by Gauteng Premier David Makhura on Monday.

With Gauteng currently in the third wave, Makhura warned that “the house is on fire” and the province could run out of Covid-19 beds in seven days if drastic measures weren’t taken.

On Thursday, the Gauteng Provincial Command Council (PCC) gave an update on Covid-19, where Professor Bruce Mellado said the province was already in a “worst case scenario”.

ALSO READ: Lockdown level 5 decision to be made this week

Mellado gave predictions based on the available data, saying the provincial government was concerned about the  fact that cases almost breached 11,000.

“If we see the same trend today and tomorrow then we will have to sound the alarm,” he said.

Mellado said high mobility and diminished adherence to social distancing were some of the causes of the increase in case numbers.

Dr Mary Kawonga, chairperson of the Gauteng premier’s advisory committee on Covid-19, said a worst case scenario was not inevitable, however, the province needs tighter restrictions.

“Level 1 did not work. It wasn’t efficient. We moved to alert level 3… we are now eight days in, but we haven’t seen any impacts yet. We expect two weeks before we start to see visible effects of alert level 3.

“However, I [want to] say that the worst case scenario is not necessarily inevitable. We need tighter restrictions and we need to balance the health with the economic [livelihoods] considerations.

“One of the things we have been proposing is perhaps a hybrid of existing level 3 measures together with some level 4 measures if possible, but as we know, often the decision for lockdown level or imposing more stringent measures lies with the national level of government.”

Makhura said 5,800 people were hospitalised as of Thursday, which jumped from 3,800 a few days ago.

The premier highlighted that the increase in cases meant that hospital admissions would rise and continue to place strain on the health system.

“Behind the numbers or the surge is hospitalisations. So when you see so many people infected, even though there will be people who recover, the question is… how many people are getting into hospitals.”

As of Wednesday night, more than 10,000 patients were being treated in both public and private hospitals for Covid-19.

Makhura said the provincial government was working with the private sector and non-governmental organisations (NGO) to enhance personnel and bed capacity.

“I meet regularly with the private healthcare management to better manage bed capacity in the province.”

Makhura announced that Charlotte Maxeke Academic Hospital will be reopened, starting with the cancer unit on 28 June.

“Thorough assessments have been done on Charlotte Maxeke Hospital. We have met with various groups including engineers, clinicians and lawyers. Reopening the hospital will not fix the problem but it will alleviate the burden on other institutions,” he said.

The reopening of Blocks 1 and 2 at the hospital will be next, followed by parts of Blocks 3 and 5. Then Block 4 will take a little longer to reopen due to the level of damage caused by a fire.

Meanwhile, DA Gauteng shadow MEC for health, Jack Bloom told The Citizen the premier did not, however, clarify  whether the hospital’s ICU beds will also be made available from Monday.

“It is critically important that the ICU beds are available to save lives in this crisis. We need to know when all the sections open in addition to the cancer unit,” Bloom said.

The R460 million Covid-19 AngloGold Ashanti hospital in Carletonville in the West Rand also still stands empty as Gauteng continues to fight a losing war against the third Covid-19 wave.

Speaking to News24, a Gauteng paramedic painted a grim picture of ambulances waiting four to five hours outside hospitals with their patients until a bed is freed up.

When The Citizen pressed the department of health in Gauteng on Thursday for an indication on when the hospital will be opened, media liaison Philani Mhlungu said: “It’s a bit tricky, I am still waiting for responses. You are not the only media house wanting answers. I’m yet to get the responses.”

Kidnappings on the rise: Several cases investigated in Gauteng
5 days ago
5 days ago

Kidnappings on the rise: Several cases investigated in Gauteng
5 days ago
5 days ago