The age based-strategy will be government's approach going forward in administering vaccines. 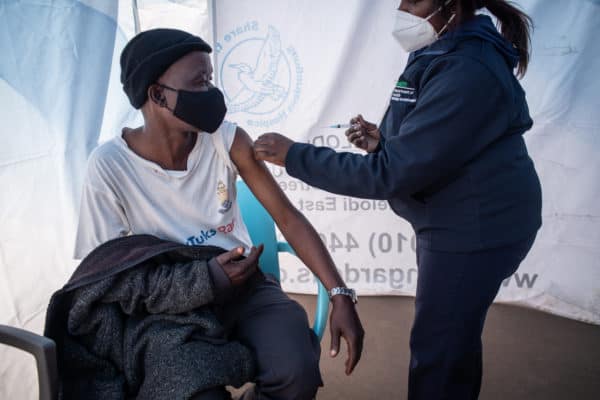 Picture File: A man in his 50s can be seen receiving the Covid-19 vaccine at a mobile vaccination site at Mams Mall in Mamelod, Pretoria, on 6 July 2021. Picture: Jacques Nelles

Acting Health Minister Mmamoloko Kubayi-Ngubane on Friday said government was putting additional systems in place to ramp up its Covid-19 vaccination rollout programme, with plans to vaccinate more than 300,000 people per day in the coming week.

The minister briefed the media on the national vaccination programme and government’s efforts in the fight against the pandemic. She was also joined by Deputy Health Minister Dr Joe Phaahla and a panel of experts.

Kubayi-Ngubane announced the country’s vaccination drive was gathering pace, with the number of vaccinated citizens having surpassed six million people.

She said more than 250,000 vaccines were being administered daily, and government believed it would reach its goal of vaccinating more than 300,000 people per day.

“The milestones we have achieved in the vaccination programme are as a result of a very productive and coordinated working relationship between government and the private sector. The private sector through the Business for South Africa platform is working very closely with government to bring vaccines to the people,” Kubayi-Ngubane said.

“Through this collaboration, we have also been able to bring into the vaccination programme 1,500 volunteers, who include doctors, nurses and health workers to help us to vaccinate on weekends on various sites across all nine provinces.”

The minister said government agreed with the Solidarity Fund that there should be mass vaccination sites in all metros across the country to cater to large population groups.

She said the first model would be roving vaccination sites that would move from one community to the next based on the demand for vaccines.

Kubayi-Ngubane said the Inter-Ministerial Committee on Vaccines agreed with the health department’s proposition to do away with sectoral prioritisation in government’s vaccine rollout. Workers in the education sector, police and correctional services officials were among the groups prioritised to receive Covid vaccines.

She also said the age based-strategy would be government’s approach going forward as it was more effective in reaching a wider spectrum of South Africans.

“The vaccination of the over 35s has been going very well. We encourage more people within this age group to go out and vaccinate,” Kubayi-Ngubane said.

At the same time, Kubayi-Ngubane said they were receiving complaints about the automated scheduling process on the electronic vaccination data system (EVDS), which allocated vaccination sites that are far from where citizens live.

Because of this, she said the EVDS was reprogrammed to allow for self-scheduling.

“This means that anyone who is registered can choose a vaccination site where he or she wants to be vaccinated.

ALSO READ:  Vaccine hesitancy: Is avoiding the jab a gamble you should take?

“To ensure that we reach all South Africans we are working on ensuring that the registration web portal or website uses all eleven official languages for ease of access. So far Isizulu, IsiXhosa, Sesotho and Afrikaans have gone live and we are still working on others.”

To vaccinate or not? There's really no question
9 hours ago
9 hours ago

To vaccinate or not? There's really no question
9 hours ago
9 hours ago