Covid-19 deaths in SA likely much higher than reported

The latest Covid-19 death report shows an anomaly between government’s official figures and thousands of other unusual deaths. 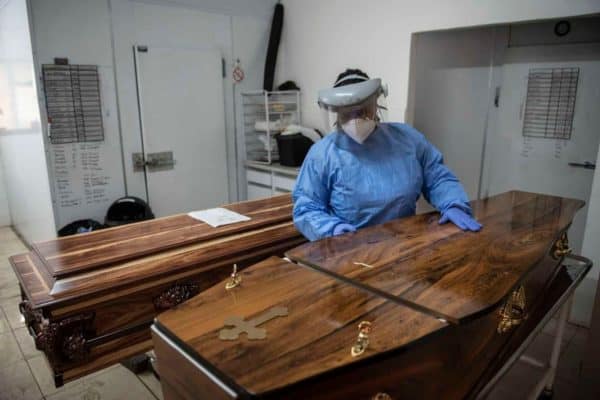 A cursory look at the latest report on weekly deaths in SA, published by the South African Medical Research Council (SAMRC) in collaboration with the University of Cape Town’s Actuarial Research unit, calls attention to the increase in deaths in SA to unprecedented levels.

It immediately shows up an anomaly between government’s official figures of Covid-19 deaths and thousands of other unusual deaths.

The latest figures from the Department of Health – issued on Friday (August 6) – show that 74 352 people lost their lives due to Covid-19 since the first reported deaths at the end of March 2020, but the SAMRC says there have been 222 500 “excess deaths” from natural causes since May 3, 2020.

The report states that there is no universal definition, or understanding, of what is meant by excess mortality, explaining it as a “term used in epidemiology and public health that refers to the number of deaths that are occurring above what we would normally expect”.

The World Health Organisation (WHO) uses the term to describe mortality above the expected mortality rate, when there isn’t a crisis causing unusual deaths.

During a crisis, whether a violent uprising or a pandemic, the deaths above this normal death rate would be classified as excess deaths.

The immediate indication that Covid-19 might be the cause of excess deaths in SA is the close correlation between the periodical increase in registered Covid-19 deaths and the increase in the total death rate.

The total number of deaths in SA increased sharply whenever Covid-19 deaths increased, and the numbers are huge.

During the so-called second wave of infections and deaths (June and July 2021), the number of excess deaths from all causes in SA increased to a peak of nearly 10 000 per week for two weeks running. In just five weeks, excess deaths amounted to 42 458.

This is the loss of life above the normal occurrence of people passing away in SA as part of the normal cycle of life, including tragic untimely deaths.

Weekly deaths in SA from all causes

Professor Debbie Bradshaw, chief specialist scientist at the SAMRC, says that while the research body does not have access to definitive information about causes of death, evaluation of the available data leads to the conclusion that the gap between known Covid-19 deaths and other excess deaths is mostly due to an under-reporting of Covid-19 deaths.

“Given the close spatio-temporal correlation of the increase in deaths with the spread of SARS-CoV-2, we are of the view that the majority of the excess deaths are related to Covid-19,” says Bradshaw.

She indicates that sources of data referring to causes of death are often inaccurate, using the history of reporting deaths due to HIV[-related illness] to explain the shortcomings in reporting procedures.

“We have been tracking the mortality trends in SA for many years, making use of multiple sources of data. We observed the dramatic increase in mortality associated with HIV.

“Since about 2006, there has been a decline in mortality rates in the country mostly associated with the roll-out of anti-retroviral treatments and the reduction in the numbers of deaths from HIV[-related illness].

“We have learnt to interpret the data very cautiously as there are high proportions without a defined cause of death and extensive misclassification of the cause. For example, doctors often avoid recording HIV, and often report a pseudonym such as ‘retro-viral disease’ or ‘immune-suppression’.

“Another example is that the number of homicides is under-reported because there is no space on the form for the pathologist to indicate this manner of death,” says Bradshaw.

During 2020, the SAMRC set up a rapid reporting system based on the numbers of registered deaths. Unfortunately, the system cannot provide information on the cause of death other than whether it was a natural cause or an unnatural cause.

“We have used this to estimate the number of excess deaths that occurred. We believe that the major change has been as a result of the Covid-19 pandemic. Injury deaths, in particular road traffic injuries and homicides, decreased.

“Given the age pattern [mostly over the age of 60] and synchronicity of the excess deaths with the waves of the pandemic, we are left with no doubt that most of the deaths have resulted from Covid-19,” says Bradshaw.

She says the increase in excess deaths is not unique to SA.

“The pandemic has probably reached every country in the world – but the impact has been extremely varied for a number of factors which are probably still needing to be explained.

“While the younger age of the SA population was expected to reduce the impact, the high prevalence of hypertension, diabetes, HIV and tuberculosis has aggravated the mortality rate,” say Bradshaw.

It is plausible that people with underlying health problems and/or unhealthy eating and lifestyle habits are more at risk.

Statistics South Africa (Stats SA) published its most recent report on the causes of mortality in SA only a few weeks ago. While the figures are dated – the report is based on 2018 mortality numbers – it gives a good reference to what people in SA normally die from.

The report states that health trends are constantly evolving as observed from the global shift from communicable to non-communicable diseases, which continue to rise.

“Since 2000, the largest increase in deaths has been from ischaemic heart disease, accounting for 16% of the world’s deaths,” says the report, quoting WHO research.

“Many premature deaths are associated with environmental factors or lifestyle choices, such as tobacco use, unhealthy diet, physical inactivity and unhealthy consumption of alcohol.”

The introduction to the report mentions that mortality levels in SA have been declining yearly, falling by 25.3% between 2006 and 2017.

Six of the top 10 leading underlying natural causes of death in 2017 were non-communicable diseases, with diabetes being the leading cause of death, according to the report.

Of the 454 014 registered deaths in 2018 in SA, 88% were from natural causes, with the biggest killer classified as diseases of the circulatory system. It accounted for nearly 19% of all natural deaths.

Communicable diseases (such as tuberculosis, pneumonia, diarrhoea, malaria and measles) declined from a peak of 48% of all deaths in 2005 to less than 29% in 2018.

It is important to note that this category includes deaths from malnutrition. The decline in these deaths indicates that SA was winning the war against disease and poverty.

During the same period, non-communicable diseases (including cancer, diabetes, heart disease and asthma) increased from 43% of all deaths to more than 59%. Seemingly, the unintended results of the improvement in living standards.

External causes of mortality such as accidents, homicide and suicide increased slightly, from 9% to 12% of all recorded deaths.

The Covid-19 pandemic seems to have changed all this, if the SAMRC conclusions about causes of deaths are correct.

The 222 000 excess deaths all fall within the parameters of communicable diseases, whether somebody died directly from the virus or by malnutrition brought on by increased economic hardship.

SA is not unique.

“It is extremely difficult to monitor the global impact as many countries do not have robust data,” says Bradshaw.

“For example, during 2020, we had similar numbers of excess deaths to the UK. However, that situation has changed completely as the UK has implemented an extensive vaccination programme.”

Government and society can contribute to a reduction in deaths, according to the SAMRC. It repeats the tried-and-tested precautions to reduce the risk of transmission: avoid crowded places, wear a mask, and sanitise.

In addition, it warns people to isolate if they show symptoms or have been exposed to somebody who has contracted Covid-19.

Bradshaw indicates that the vaccination programme should be accelerated, which includes overcoming mounting hesitancy about being vaccinated.

Far fewer people are fully vaccinated than the numbers suggest.

Only 1.8 million have received the single dose Johnson & Johnson vaccine. The numbers of administrations are bulked up by the more than 6.7 million doses of the two-dose Pfizer vaccine that have been administered.

However, only slightly more than 1.7 million people have received both Pfizer doses, indicating that, to date, only 3.50 million people in SA have been fully vaccinated.

(The government’s coronavirus information portal says the numbers are somewhat dated because some paper-based records take longer to capture and reflect on the database.)

What this means is that 8.75% of South Africa’s adult population of around 40 million people have been vaccinated so far, and 5.8% of the total population.

Listen: Dr Glenda Gray, president and CEO of SAMRC, shares her views on the Covid-19 pandemic and vaccines

OMICRON UPDATES: How health dept is prepping for fourth wave
1 hour ago
1 hour ago

OMICRON UPDATES: How health dept is prepping for fourth wave
1 hour ago
1 hour ago