Ouch! Anti-vaxxers might be forced to get Covid-19 vaccine

The health minister said this would likely be aimed at workplaces, restaurants, cinemas and gyms. 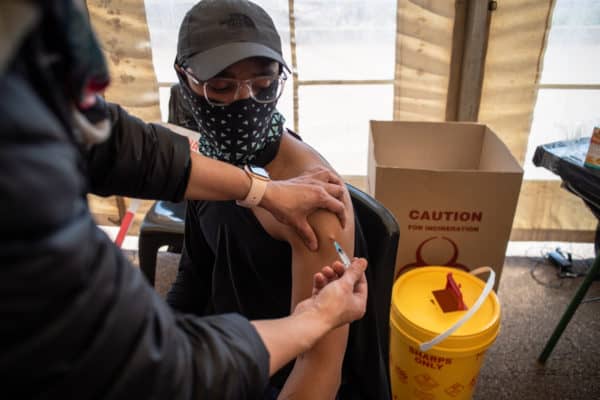 Lucas Rannutloa, 25, at the Zwartkops Raceway drive-thru vaccination site getting his jab, 20 August 2021, as the vaccine roll-out is made available for over 18's, Pretoria. Picture: Jacques Nelles

The minister said this would likely be aimed at workplaces, restaurants, cinemas and gyms. But no decision had been taken on mandatory vaccinations.

“It’s a matter that has been raised and we are discussing under what conditions this might be possible. So, it’s not something that has been decided on.

“But in my own view, in terms of what is possible, we don’t foresee some kind of national government regulations, which says everybody must vaccinate,” Phaahla said.

He was speaking during a media briefing regarding government’s efforts in the fight against the Covid-19 pandemic.

Phaahla said government does not want to force citizens to get vaccinated, but a sector-based approach would likely work.

“…What is possible, and I believe we would consider, is where various service providers or areas of entertainment and even workplaces that is a possibility where [a] locally determined requirement can be either at work or where people receive particular services [like] restaurants, cinemas, gyms and so on to protect each and every one.

“We believe that those are the things that could be done but we don’t really foresee where it can be regulated as part of the disaster management so say [vaccines] are compulsory for every adult,” he said.

Last Friday, government officially opened the registration and vaccination to all adults after a slow uptake of vaccines among other age groups.

Even the weekend numbers were much higher, he said.

The ratio of the number of women and men getting vaccinated was also narrowing, standing at 58,5 females to 41,5 males.

Phaahla said this was likely due to young people who were eager to get vaccinated.