If you thought there were no black Russians, you were wrong

Despite having a relatively tiny black community, Russia does boast some notable Afro-Russian figures, both past and present. The slogan of the 2018 World Cup is ‘Say No to Racism’. A senior Russian lawmaker seems not to have taken this advice to heart, though, when she called on women in the country to not have sex with foreign soccer fans in town for the World Cup in case they have mixed race babies.

A pulled Russian Burger King ad, though, which offered women free burgers if they manage to get impregnated by football stars, indicates that not everyone in the country shares her reservations.

The lawmaker’s words are probably best ignored in a country that could use a bit more colour. Russia is not a place known for its large African community. Afro-Russians, as many like to be known, make up only roughly 40 000 of its population of more than 144 million.

Soviet Russia did show some kinship with the apartheid struggle, and the ANC were considered allies whose members received a warm reception there while in exile. There is also a Mount Robeson in Russia, named after Paul Robeson, a multitalented African-American singer, actor, activist, athlete and cultural icon best known for his distinctive baritone voice.

But are there any notable black Russians, past or present? The answer is yes. The most prominent example of a famous, black Russian is Alexander Pushkin. Seen as the father of Russian literature and the greatest ever Russian poet, Pushkin had African ancestory.

He has even had a brand of vodka named after him. Pushkin’s satirical, controversial work sometimes found him at odds with Tsar Alexander the first, who exiled him and forbid him to create any work.

Not one to bow to authority, Pushkin wrote his most famous play, Boris Godunov, while under police surveillance. Just in case he doesn’t sound badass enough, Pushkin met his end in a sword duel with a French officer who tried to seduce his wife.

He takes his place among other important European writers and artists who were African or had African ancestry, such as Three Musketeers author Alexandre Dumas, classical composer Samuel Coleridge-Taylor, and Anton Wilhelm Amo, a Ghanaian-born, German-based philosopher. There have even been theories about William Shakespeare, although an urban legend that his plays were actually written by a black woman called Amelia Bassano was judged false by US fact-checking site Snopes. Gannibal (sometimes known by his Westernised name Hannibal) was a slave who rose to become a major-general in the Russian military, the governor or Reval and a Russian nobleman.

Brought to Russia in the 18th Century and destined for a life of servitude, Gannibal became a favourite of Tsar Peter the Great, who sponsored his education in France. On his return, as well as becoming a noted military man, nobleman and politician, Gannibal also published books on geometry and directed major canal construction work.

Africa’s richest woman may be based in Angola, but with a mom who hails from Russia, she is claimed by some Afro-Russians as a part of this elite club.

The child of Angola’s President Jose Eduardo dos Santos and his Russian bride, Tatiana Kukanova, Dos Santos is worth more than $3 billion, according to Forbes. In 2015, BBC named her one of the 100 most influential women in the world. Dos Santos made her fortune through a tracking business, other telecoms endeavors and a whole lot of clever investment. Being daughter of the president probably didn’t hurt, though. 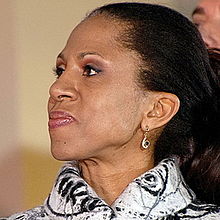 The 31-year-old adult performer was born in the Russian city of Petersburg.

Photographer Liz Johnson Artur spoke to black people living in modern Russian for a piece in the Guardian titled Black in the USSR: what’s life like for a ‘Russian of colour’?

Some spoke of racism, saying things such as: “Russia is quite a chauvinistic country. They don’t like black people here,” or “strangers trying to touch my hair is something I really don’t like.”

The comments weren’t all bad though, with a martial artist called George saying: “Russia was good to me: it gave me the opportunity to open my own martial arts studio. I could have never done this in the Congo.”