A US intelligence officer's whistle-blower report alleges the US president pressured Ukraine to help his 2020 election campaign. 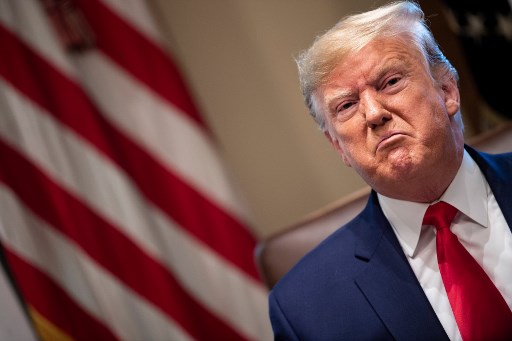 The impeachment inquiry of US President Donald Trump gained momentum this week as a top US diplomat in Ukraine linked the president to a pressure campaign aimed at forcing President Volodymyr Zelenskyy to investigate the 2016 and 2020 US elections.

Tensions escalated between House Democrats leading the inquiry and Republicans trying to defend Trump. Republicans attempted and failed to censure Representative Adam Schiff, who is leading the Democratic impeachment inquiry.

“What the Republicans fear most is the truth,” House Speaker Nancy Pelosi said in a statement on Monday as the House defeated the Republican censure motion by a vote of 218-185.

“The president betrayed the oath of office, our national security and the integrity of our elections, and the GOP has not even tried to deny the facts,” she said.

Meanwhile, Democrats were handed a victory on Friday as a federal judge ruled the Department of Justice must hand over grand jury evidence from the investigation of former Special Counsel Robert Mueller.

Since September 24, the Democrat-led House has been pursuing the impeachment inquiry. It was sparked by a US intelligence officer’s whistle-blower report that alleged the Trump and his personal lawyer, Rudy Giuliani , pressured Ukraine to help his 2020 election campaign.

Here are six things that happened this week related to the inquiry.

William Taylor, a top US diplomat in Kyiv, stunned House members by telling impeachment investigators that Trump direct that military aid to Ukraine be contingent on the country publicly announcing investigations of the president’s Democratic rivals.

In a 15-page statement delivered behind closed doors on Tuesday, Taylor chronicled an “irregular” effort led by Giuliani to force Zelesnkyy to open investigations into former Vice President Joe Biden and the role of his son, Hunter, on the board of gas company Burisma.

Trump also wanted Ukrainian officials to open an investigation into unsubstantiated claims of Ukranian, not Russian, cyber-interference in the 2016 US presidential election, according to Taylor’s statement which was provided to US media.

Taylor, referring to a September 1 phone call with Gordon Sondland, the US ambassador to the European Union, told investigators: “President Trump had told him (Sondland) that he wants President Zelenskyy to state publicly that Ukraine will investigate Burisma and alleged Ukrainian interference in the 2016 US election.”

Sondland told Taylor that “everything” was dependent on such an announcement, including security assistance, Taylor said, according to his opening statement. “He said that President Trump wanted President Zelenskyy ‘in a public box’ by making a public statement about ordering such investigations,” Taylor told investigators.

In a September 9 text message to Sondland, released earlier this month, Taylor said it would be “crazy” to withhold military aid to Ukraine in exchange for help with a domestic political campaign in the US.

On Friday, Trump labelled Taylor a “never Trumper”, a term used for Republicans who oppose the president.

“Everybody makes mistakes,” Trump told reporters outside the White House when asked by Secretary of State Mike Pompeo hired Taylor earlier this week.

Trump has repeatedly denied there was any quid pro quo (Latin for a favour for a favour) but his acting White House Chief of Staff Mick Mulvaney told reporters last week the military aid, in fact, had been suspended because Trump wanted the new Ukraine government to open an investigation. Mulvaney has since attempted to walk back on those comments.

In his July 25 call with Zelenskyy, Trump asked for the investigations and Zelenskyy promised to deliver, according to the White House log of the call.

A federal judge on Friday ruled that the Justice Department must hand over grand jury evidence from former Special Counsel Robert Mueller’s investigation into Russian interference in the 2016 election.

Mueller did not establish that the Trump campaign conspired with Russian operatives, but did examine “multiple acts by the president that were capable of exerting undue influence over law enforcement investigations”.

The special counsel did not conclude Trump committed obstruction of justice, but did not exonerate him either as the president has claimed.

“In carrying out the weighty constitutional duty of determining whether impeachment of the president is warranted, Congress need not redo the nearly two years of effort spent on the Special Counsel’s investigation, nor risk being misled by witnesses, who may have provided information to the grand jury and the Special Counsel that varies from what they tell” the House Judiciary Committee, Chief US District Judge Beryl Howell wrote in her decision.

Laura Cooper, a top Pentagon official for Russia and Ukraine, defied a Defense Department directive not to cooperate, and testified to impeachment investigators for three hours on Wednesday.

Cooper provided investigators with a detailed explanation of how US foreign military assistance is normally delivered and how the aid to Ukraine authorised by Congress was handled differently in July, August and September, according to US media reports citing House members who attended the closed-door hearing.

Trump had ordered White House staff to suspend all security assistance to Ukraine in July, according to the whistle-blower’s report. Word of the freeze in aid had reached high-level Ukrainian officials in early August, according to a report on Wednesday in the New York Times newspaper.

Word of the delay also had concerned top US politicians including Senate Majority Leader Mitch McConnell, a Republican who had questioned top Trump administration officials about the aid over the summer.

“I have no idea what precipitated the delay, but I was among those advocating that we needed to stick with our Ukrainian friends,” McConnell told reporters in September after the whistle-blower complaint became public.

Several dozen House Republicans who do not sit on any of the three committees conducting the impeachment probe barged into a secure hearing room in the US Capitol on Wednesday, disrupting proceedings.

Prompted by Trump’s demand Republicans get tougher on the impeachment inquiry, the members said they were protesting how Representative Adam Schiff, the Democratic chairman of the Intelligence Committee, has handled matters.

“All we are saying is let’s have a fair process, let’s have due process,” said Representative Jim Jordan, the top Republican on the House Oversight Committee, one of three key committees conducting the impeachment inquiry.

“Let’s sit down and negotiate how this would work as we go forward. Give us some rights. Don’t take the benches out so staff can’t sit there. Don’t tell us we can’t see the transcripts,” Jordan told reporters in the Capitol on Wednesday.

“This is the ridiculous stuff that is going on,” he said.

The group of Republicans refused to leave and sat down inside the hearing room to a lunch of delivered pizza and takeout chicken sandwiches before House administrative officials arrived to enforce House rules. The move delayed the start of Cooper’s testimony by five hours.

Democrats rejected the Republican manoeuvre as a political stunt.

“Today, Laura Cooper did her lawful duty and answered questions from both parties. She did so notwithstanding efforts by the president to stop her, and when those failed, efforts by his GOP allies in Congress to do the same,” Schiff said in a tweet.

Senator Lindsey Graham, a Republican ally of Trump, introduced a resolution in the Senate that seeks to label the House’s closed-door fact-gathering process unfair.

“What I am trying to tell Republicans out there is that, it is ok for the Republican party to insist that Donald Trump be treated fairly,” Graham said at a news conference in the US Capitol on Thursday.

“I am hoping we can get most Republicans to comment on the idea that the impeachment proceedings, as currently constituted in the House, are unfair and dangerous,” Graham said.

“What they are doing is selectively leaking information to drive the president’s poll numbers down and drive the momentum for impeachment up. Everything coming out of this star-chamber process is being leaked by Democrats.”

Graham introduced the resolution after meeting with Trump and a group of eight Republican senators at the White House on Thursday to discuss the strategy for defending the president.

If passed, the measure, which had 41 Republican co-sponsors and leadership backing as of Thursday, would be a non-binding expression of majority sentiment. A strong Republican vote would signal the Senate’s scepticism of the House impeachment inquiry.

Senate Democrats believe the closed-door hearings in the House are fair and expect the House investigators to release transcripts and move to public hearings soon, according to Dick Durbin, the number-two Democratic leader in the Senate.

“There are Republicans and Democrats, 100 of them I understand asking questions. This isn’t exactly a secret meeting by congressional standards. This is as open as a meeting can be. But I am sure it will move to another phase where there will be more public transcripts taken,” Durbin told reporters.

Acting Assistant Secretary of State Philip Reeker is scheduled to testify privately to the impeachment inquiry on Saturday.

Two key witnesses are scheduled for next week. Former Deputy Assistant to the President for National Security Charles Kupperman is to appear on Monday. National Security Council Senior Director for Europe and Russia Tim Morrison is set for Thursday.

Schiff and two other committee chairs, Eliot Engel of House Foreign Affairs and Carolyn Maloney of House Oversight, sent the State Department a letter demanding compliance with an earlier subpoena for documents.

Specifically, the investigators are seeking written memoranda, email correspondence, diplomatic cables and text messages that relate to “the president’s efforts to press Ukraine to initiate investigations that would benefit his personal and political interests and not the national interest”, the letter said.

On Friday, subpoenas were sent to two Office of Management and Budget officials, as well as Department of State Counsellor T Ulrich Brechbuhl, calling on them to appear for depositions on November 5-6.

“Your failure or refusal to appear at the deposition, including at the direction or behest of the president or the White House, shall constitute evidence of obstruction of the House’s impeachment inquiry and may be used as an adverse inference against the president,” Schiff, Egneel and Maloney said in a letter to the officials.

Coronavirus has killed at least 5.2 million people worldwide
8 hours ago
8 hours ago

Coronavirus has killed at least 5.2 million people worldwide
8 hours ago
8 hours ago