Some details of the new system were given by EU officials speaking to journalists on condition of anonymity a day ahead of its expected adoption by the European Commission. 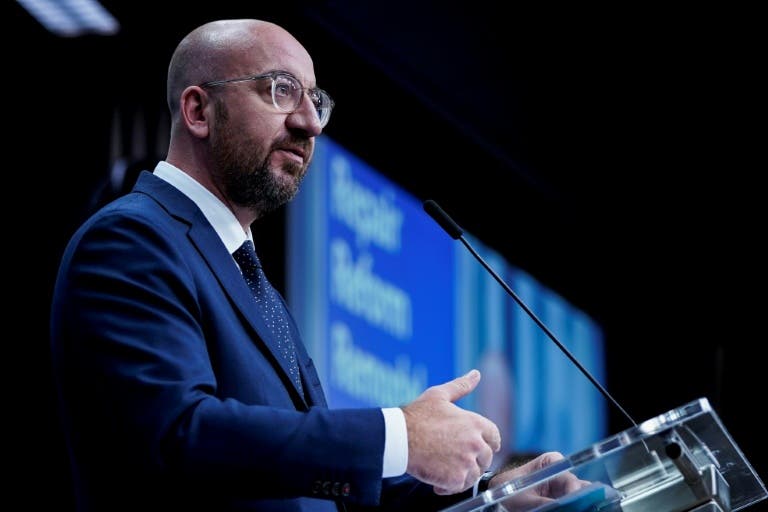 European Council President Charles Michel proposed a five billion euro Brexit reserve fund when he unveiled his latest proposal for a long-term EU budget that will be debated by bloc leaders next week. POOL/AFP/Kenzo TRIBOUILLARD

The European Union is setting up a Covid-19 vaccine export monitoring system giving member states an opportunity to ban shipments out of the bloc if they are not “legitimate”, officials said Thursday.

European Council President Charles Michel welcomed the move in a letter to the leaders of four member states, saying: “The EU needs to take robust action to secure its supply of vaccines and demonstrate concretely that the protection of its citizens remains our absolute priority.”

Some details of the new system were given by EU officials speaking to journalists on condition of anonymity a day ahead of its expected adoption by the European Commission.

Although they said the “emergency measure” did not target any company, it is being hastily introduced a week after a row started between the commission and Anglo-Swedish firm AstraZeneca over a major shortfall in vaccine deliveries.

“It’s not an export ban. It’s not our plan to ban exports,” one official said, though he admitted that in “a rare case” a refusal for export “could happen”.

The system, called a “transparency and licencing mechanism for exports”, is to gather information on Covid-19 vaccine production to be sent out of the EU, which is one of the world’s vaccine-manufacturing powerhouses.

It will be based on an EU law already invoked last year to regulate the export of personal protective gear such as masks and gloves when the Covid pandemic first hit the continent.

The officials said it would be compliant with World Trade Organization (WHO) rules and exports clearly defined as “humanitarian” would be exempt.

The rationale was that the EU had invested billions of euros in vaccine-making companies to secure its 2.3 billion doses of potential vaccines, and therefore “we owe it not only to the patients of Europe… but also the taxpayers”.

Companies wanting to export Covid-19 vaccines from the EU would be required to contact authorities in the EU member state in which their plant was located for authorisation, which as a rule would be given within “hours”.

“There is a possibility in certain circumstances not to allow the export to move forward. But the basic assumption is that the exports will take place as foreseen,” one of the three officials said.

Another of the EU officials added that, in the event of an export refusal, “the companies can challenge this — but as their interest is to export… a lengthy legal procedure will certainly not help”.