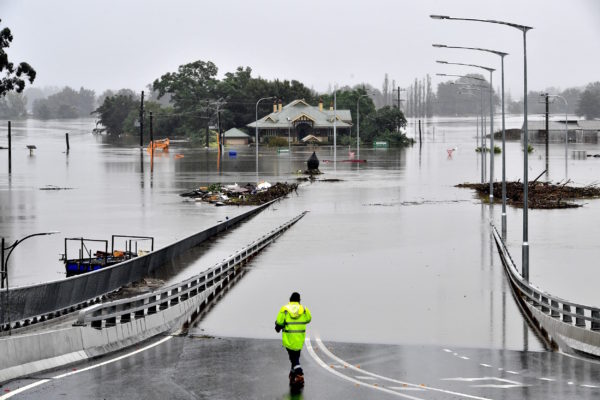 A rescue worker stands at the entrance to Windsor Bridge after the area was inundated with floods in the Windsor area in northwestern Sydney on March 23, 2021, after torrential downpours have lashed Australia's southeast for days. (Photo by Saeed KHAN / AFP)

Helicopters and boats were deployed to rescue residents stranded by “catastrophic” floods in eastern Australia Tuesday, as authorities warned more areas were now under threat.

So far, around 850 people have been winched or ferried to safety, but tens of thousands have been told to flee their homes and wild weather has spread to more inland areas.

In hard-hit Windsor, near Sydney, residents traversed the murky debris-strewn torrent on jet skis and other vessels normally seen off the city’s golden beaches.

Some coastal regions have received a metre (three feet) of water in a week, the equivalent of two-thirds of normal annual rainfall.

“We’ve never seen anything like this ever,” said 50-year-old Jodie Sallustio, who has been stranded by floodwaters surrounding her partner’s Port Macquarie home since Friday.

About 18,000 people have already been evacuated across New South Wales, with state Premier Gladys Berejiklian saying the wild weather was now “impacting a huge area of the state”.

“It is catastrophic in its dimensions and the impact will be severe, and the fact that 15,000 people may need to be evacuated within the next 24 to 48 hours is a huge concern,” she said.

In parts of the state, residents have begun looking to clean-up efforts but meteorologists have warned that flooding will persist for days even though rainfall is forecast to ease Wednesday.

“This is a complex weather event and becoming more complex,” he told reporters in Canberra.

Emergency services have responded to more than 10,000 calls for help.

So far, no fatalities or serious injuries have been reported, but thousands of homes and businesses are believed to have been damaged.

Organic farmer Rod Bailey said his property near Port Macquarie had suffered “complete devastation” with at least 95 percent of its crops destroyed by heavy rains.

“We won’t see any income short of three months,” he told AFP. “It’s a difficult situation we’re in but many of our neighbours have had it far worse.”

The Bureau of Meteorology warned Tuesday that “we are not out of the woods yet”, with half of New South Wales still under emergency weather warnings.

State Emergency Service assistant commissioner Nicole Hogan told public broadcaster ABC another 1,750 volunteers had arrived from interstate to support the efforts in what would be a “critical 24 hours”.

Flood and severe weather warnings have been extended to areas not previously affected, including the south coast of Sydney and outback areas to the northwest recently crippled by a prolonged drought.

Scientists have warned Australia can expect more frequent and more extreme weather events as a result of climate change.

Just north of New South Wales, parts of Queensland state’s populated southeast have also been hit by flooding after days of heavy rain.

Eight million residents in Sydney and across the state have been told to work from home if possible and avoid unnecessary travel.

Health officials have said the rain and floods will delay the already halting roll-out of coronavirus vaccines in Sydney and surrounding areas.