Under Massoud, the Panjshir fighters earned a legendary reputation for resistance, defending their mountain homes first from the Soviet military for a decade, then throughout a civil war, then the last Taliban regime from 1996-2001. 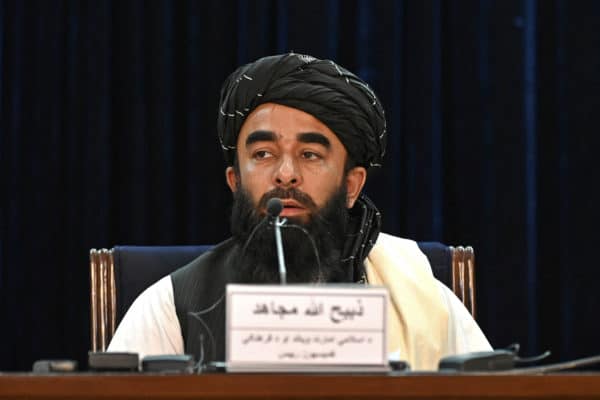 Taliban spokesman Zabihullah Mujahid speaks during a press conference in Kabul on September 6, 2021. - The Taliban on September 6, 2021 said that any insurgency against their rule would be "hit hard", after earlier saying they had captured the Panjshir Valley -- the last pocket of resistance. (Photo by Wakil Kohsar / AFP) / The erroneous mention[s] appearing in the metadata of this photo by WAKIL KOHSAR has been modified in AFP systems in the following manner: [Removing the month August from caption]. Please immediately remove the erroneous mention[s] from all your online services and delete it (them) from your servers. If you have been authorized by AFP to distribute it (them) to third parties, please ensure that the same actions are carried out by them. Failure to promptly comply with these instructions will entail liability on your part for any continued or post notification usage. Therefore we thank you very much for all your attention and prompt action. We are sorry for the inconvenience this notification may cause and remain at your disposal for any further information you may require.

Taliban fighters broke out into prayers as their banner fluttered from a flagpole in Panjshir on Monday, after the hardline Islamist group announced the capture of the last pocket of resistance to their rule.

Three weeks after seizing Kabul, the Taliban claimed to have conquered the rugged valley on Monday — a historic blow to the province.

Under Massoud, the Panjshir fighters earned a legendary reputation for resistance, defending their mountain homes first from the Soviet military for a decade, then throughout a civil war, then the last Taliban regime from 1996-2001.

“With this victory, our country is completely taken out of the quagmire of war,” the Taliban’s chief spokesman Zabihullah Mujahid said in a statement.

Soon after, in a photograph released by Taliban official Bilal Karimi, the same picture of Massoud is seen with his face ripped out. Taliban gunmen then stand posing in front of the ragged portrait.

The National Resistance Front (NRF) — made up of anti-Taliban militia and former Afghan security forces — have admitted to suffering heavy losses, and have called for a ceasefire.

On Sunday, the NRF said spokesman Fahim Dashty — a well-known Afghan journalist — and a top commander, General Abdul Wudod Zara, had been killed.

But they also said their fighters were still present in “strategic positions” across the valley, and that they were continuing the struggle.

The Taliban completed a stunning two-week offensive across Afghanistan on August 15, taking the capital, Kabul, without a fight.

Remnants of the Afghan army then retreated to the Panjshir Valley, north of Kabul, to create the NRF.

The 115-kilometre-long (70-mile-long) valley surrounded by jagged snow-capped peaks offers defenders a natural military advantage, allowing them to use the high positions to ambush attacking forces below.

But they faced internet shutdowns by the Taliban and supply roads were blocked.

Previously, Panjshir’s fighters melted away in the face of advancing forces, hiding in canyons off the main valley, then launching guerilla raids.

But the Taliban have been emboldened by their sweeping victories across the rest of the country, where they seized an enormous arsenal of weapons and military kit that the now-departed US provided to the defeated Afghan army.

The NRF is led by Ahmad Massoud — the son of Ahmad Shah Massoud — as well as ex-officials who fled to the valley from the toppled government, including former vice-president Amrullah Saleh, a fierce Taliban critic.

It is unclear where those senior Panjshir leaders are now based.