It was released after President Joe Biden was pressured by family members of those killed on 9/11 who have sued Saudi Arabia for complicity. 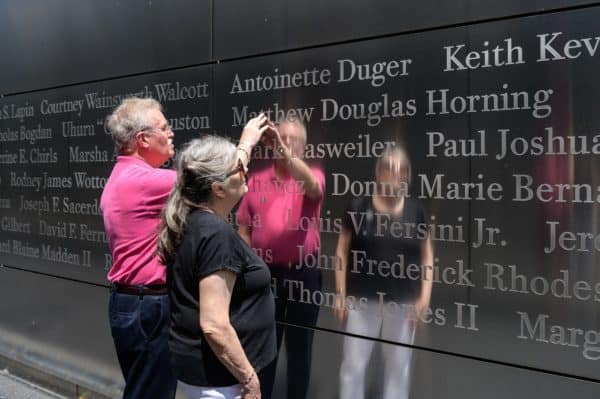 Picture File: Diane and Kurt Horning, who lost their son Matthew Horning in the 11 September 2001, attacks, look at their sons name at the Empty Sky Memorial on 15 June 2021 in Jersey City, New Jersey. - Twenty years later and they still talk regularly: survivors and relatives of 9/11 have formed strong friendships through support groups that have proved effective antidotes to their trauma. Picture: AFP

The Biden administration declassified an FBI memo Saturday that fortified suspicions of official Saudi involvement with the hijackers in the 11 September 2001 attacks, but it fell well short of proof that victims’ families suing Saudi Arabia had hoped for.

The memo from 4 April 2016, which had been classified until now, showed links between Omar Bayoumi, at the time a student but suspected to have been a Saudi intelligence operative, and two of the Al-Qaeda operatives who took part in the plot to hijack and crash four airliners into targets in New York and Washington.

Based on 2009 and 2015 interviews with a source whose identity is classified, the document details contacts and meetings between Bayoumi and the two hijackers, Nawaf al Hazmi and Khalid al Midhar, after the two arrived in Southern California in 2000 ahead of the attacks.

It also strengthens already-reported links between the two and Fahad al Thumairy, a conservative imam at the  King Faad mosque in Los Angeles and an official at the Saudi consulate there.

ALSO READ: 9/11 mastermind yet to be tried and convicted 20 years later

The document says that telephone numbers associated with the source indicated contact with a number of people who assisted Hamzi and Midhar while they were in California, including Bayoumi and Thumairy, as well as the source himself.

It says the source told the FBI that Bayoumi, beyond his official identity as a student, had “very high status” in the Saudi consulate.

The memo also said that the FBI source’s wife told them Bayoumi often talked about “jihad.”

And it further connects by meetings, phone calls and other communications, Bayoumi and Thumairy with Anwar al Alaki, the US-born cleric who became an important Al-Qaeda figure before he was killed in a drone strike in Yemen in 2011.

The document released was still significantly redacted and did not offer a clear direct link between the Saudi government and the hijackers.

It was released after President Joe Biden was pressured by family members of those killed on 9/11 who have sued Saudi Arabia for complicity.

Three successive US administrations have refused to declassify and release documents related to the case, apparently because they do not want to damage the US-Saudi relationship.

Jim Kreindler, one of the leaders of the lawsuit, said the document validates the lawsuit’s key contention that the Saudi government helped the hijackers.

“With this first release of documents, 20 years of Saudi Arabia counting on the US government to cover up its role in 9/11 comes to an end,” Kreindler said in a statement.

The families are still hoping for stronger evidence when more classified material is released inside the next six months, based on a Biden order.