US ‘absolutely’ has ability to defend Taiwan – top Pentagon general

Milley said he did not foresee Beijing, which views Taiwan as a renegade province, making any moves against the island in the near future, which he defined as up to 24 months. 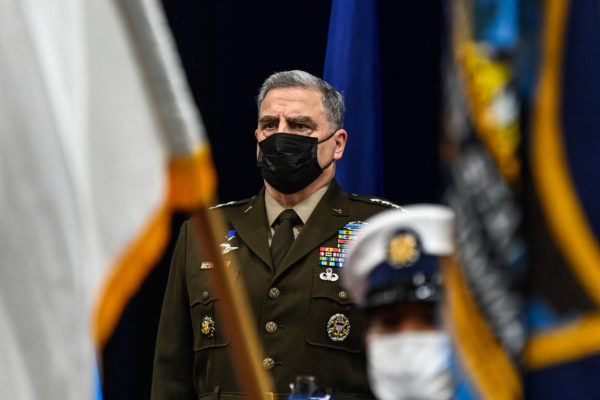 Chairman of the Joint Chiefs of Staff Mark Milley stands for the national anthem during the US Southern Command (SOUTHCOM) change-of-command ceremony at SOUTHCOM headquarters in Doral, Florida on October 29, 2021. (Photo by CHANDAN KHANNA / AFP)

The United States military “absolutely” has the ability to defend Taiwan from an attack by China if called on to do so, US Joint Chiefs Chairman Mark Milley said Wednesday.

Milley said he did not expect China would take military action against the island in the next 24 months.

But, when asked if the Pentagon could defend Taiwan, he replied that there was no question about it.

He told the Aspen Security Forum that the United States maintains a policy of “strategic ambiguity” about its stance on protecting Taiwan, and that it would be a presidential decision on whether to step in if China sought to seize control of the island.

Milley said he did not foresee Beijing, which views Taiwan as a renegade province, making any moves against the island in the near future, which he defined as up to 24 months.

“Having said that, though, the Chinese are clearly and unambiguously building the capability to provide those options to the national leadership if they so choose at some point in the future,” he said.

He added that the United States believes the differences between China and Taiwan should be resolved peacefully based on the will of the people on both sides.

“We are just interested in a peaceful outcome,” Milley said.