In a sharp escalation of rhetoric, Putin warned Tuesday that Russia was prepared to take military steps in response to 'unfriendly' Western actions over the Ukraine conflict. 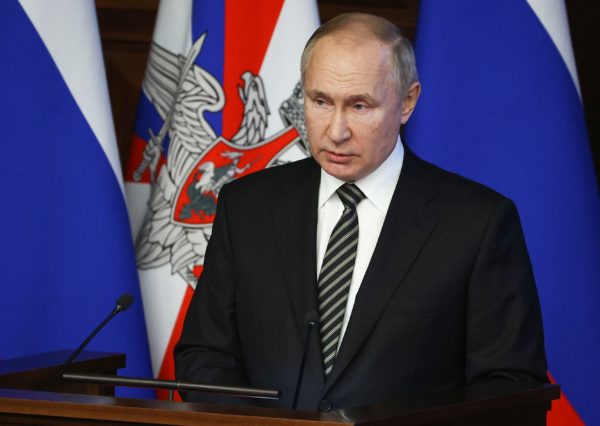 Russian President Vladimir Putin addresses the audience at the annual meeting of the Defence Ministry board in Moscow on December 21, 2021. (Photo by Mikhail Tereshchenko / SPUTNIK / AFP)

Baerbock said that given “further troop movements on the border” to Ukraine by Russia, Berlin was “greatly concerned” by Putin’s latest remarks.

The minister, who has called for Berlin to take a firmer line with Moscow than former chancellor Angela Merkel’s previous government, said “dialogue” was now essential to try to defuse a “major crisis”.

“That is why I have repeatedly stressed in recent days that we have to return to the negotiating table in the Normandy Format” grouping Germany, France, Russia and Ukraine as well as in the NATO-Russia Council, she said.

Such talks would be aimed at “heading off further escalation because we can only resolve this major crisis we are in through dialogue”, she told reporters after talks with her counterpart from Luxembourg, Jean Asselborn.

In a sharp escalation of rhetoric, Putin warned Tuesday that Russia was prepared to take military steps in response to “unfriendly” Western actions over the Ukraine conflict.

He also called for “serious negotiations” on Russian security demands put to the United States and NATO during his first call with Germany’s new chancellor Olaf Scholz, who in turn called for “de-escalation”.

The Russian president has for weeks accused the United States and the Washington-led NATO military alliance of stoking tensions near Moscow’s borders, but these were his first comments hinting at potential conflict.

Western governments have accused Moscow of amassing some 100,000 troops near its border with eastern Ukraine, where Kiev has been fighting pro-Russia separatists since 2014.

Russia denies plotting an invasion and has demanded legal guarantees over its security from the United States and NATO, demanding the alliance stop an eastward expansion.