Russia claimed the images seemingly showing a massacre in Bucha were fake. 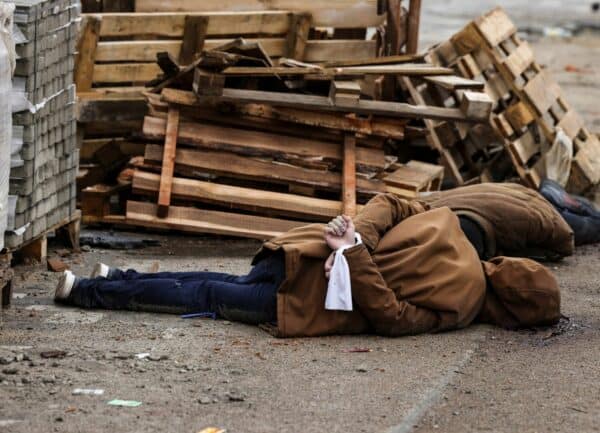 The body of a man, with his wrists tied behind his back, lies on a street in Bucha, just northwest of the capital Kyiv on 2 April 2022. The bodies of at least 20 men in civilian clothes were found lying in a single street after Ukrainian forces retook the town from Russian troops, AFP journalists said. Photo: RONALDO SCHEMIDT / AFP

Satellite photographs published by the US firm Maxar Technologies, and the analysis of photographs taken by AFP, rebut Russian assertions that dead bodies in civilian clothing found in Bucha had appeared there after Russian forces retreated from the devastated Ukrainian town.

Since its February 24 invasion of Ukraine, Russia has faced both fierce resistance from Kyiv’s forces and growing accusations it has carried out war crimes and crimes against humanity, allegations it denies.

Mid-March satellite imagery of a Bucha street appears to show several bodies of civilians lying dead in or just off the roadway where Ukrainian officials recently said they found multiple corpses after Russian troops withdrew.

The Ukrainian army retook the town of Bucha, northwest of Kyiv, only several days ago and Kyiv said at the weekend it had found numerous bodies following the Russian pullout.

“High-resolution Maxar satellite imagery collected over Bucha, Ukraine, (northwest of Kyiv) verifies and corroborates recent social media videos and photos that reveal bodies lying in the streets and left out in the open for weeks,” Maxar Technologies spokesman Stephen Wood said in a statement on Monday.

The New York Times published an analysis of close-ups of Bucha’s Yablonska Street, and concluded – after comparing it with video footage from April 1 and 2 of dead bodies along the street – that many had been there since at least three weeks ago, when Russian forces were in control of the town.

Corroborating the New York Times analysis, AFP also tallied these satellite images with those taken by an AFP team on Saturday, when it saw the corpses of at least 22 people dressed in civilian clothing.

A number of bodies present on a satellite image, provided by Maxar and dated March 19, appear in the same position and in the same place as in the AFP photos, which were taken two weeks later.

On Monday, Kremlin spokesman Dmitry Peskov categorically rejected all the accusations, saying that Russian defence ministry experts had found signs that the images presented by the Ukrainian authorities to show there had been a massacre were fake.

Russia’s defence ministry said that all its units “withdrew completely from Bucha as early as March 30”.

The denial was repeated in New York by Vassily Nebenzia, the Russian ambassador to the UN, who told a press conference the corpses pictured in Bucha were not there before Russian troops left the city.

“Suddenly they appear on the streets lying on the road, one by one, left and right. Some of them are moving, some of them showing the signs of life,” he said, claiming the scenes were “arranged by the Ukrainian information, information warfare machine”.

ALSO READ: Bucha massacre: What we know about the horror in the small Ukrainian town

However, an analysis of images published on social media, as well as AFP’s photos and accounts of its journalists on the scene, rebut this version of events.

On its Telegram account, the Russian defence ministry said it saw two bodies move, based on video filmed on Yablonska Street and posted online on April 2.

However, an AFP team on the scene on April 3 photographed these two immobile bodies in exactly the same place and the same position as on the video.

During a visit to Bucha on Monday, Ukrainian President Volodymyr Zelensky accused Moscow of war crimes and genocide after the discovery of scores of bodies in the area.

“You stand here today and see what happened. We know that thousands of people have been killed and tortured with extremities cut off, women raped, children killed,” he told reporters, wearing a bullet-proof vest and accompanied by military personnel.